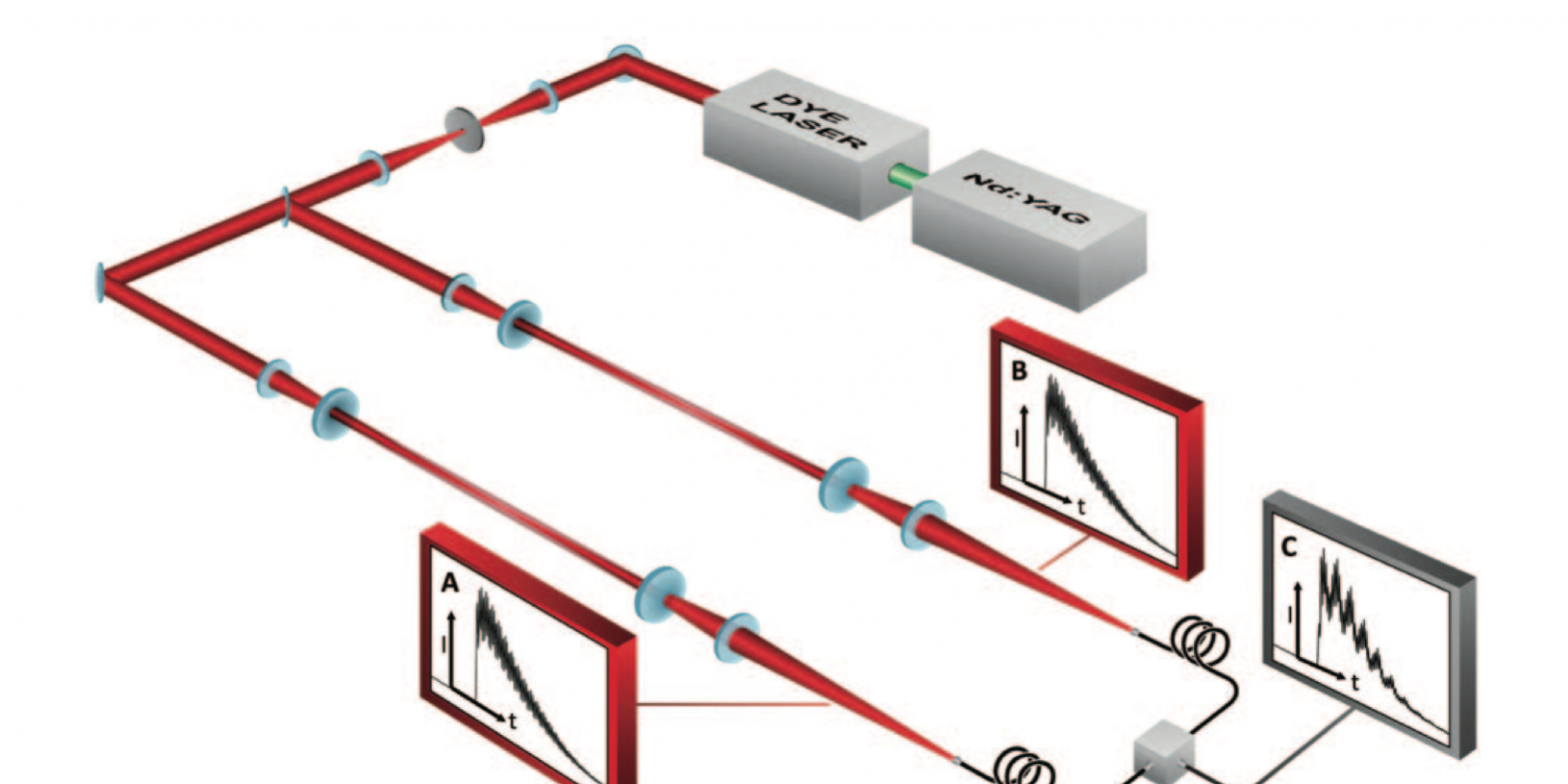 In developing the dual etalon frequency comb (DEFCOM) spectrometer, CRF researchers Haifeng Huang and David Chandler are refining a new concept for time-resolved Fourier-transform (FT) spectroscopy based on the interference between two transient frequency combs. By opening the door to many potential uses—including time-resolved, high-resolution, broad-band spectroscopy with a microsecond time-scale—DEFCOM may prove instrumental in monitoring chemically dynamic systems that require simultaneous monitoring of several species.

DEFCOM uses two independent etalons to generate two frequency combs, with the comb bandwidth set by the bandwidth of the laser beam used to excite the etalons. The etalon lengths are set to create a gap of ~250 kHz between their free spectral ranges (~300  MHz). Figure 1. Schematic of the DEFCOM spectrometer. A broadband laser beam is spatially filtered, and a beam splitter separates the light into two beams that are coupled into the two spectrometer arms. The two arms’ outputs are combined using single-mode fiber optics, and the combined signal intensity is monitored by a fast photomultiplier tube or, if there is sufficient light intensity, a photodiode. The detector current is recorded using a digitizing scope and Fourier transformed to recover the spectrum.

Placed in one or both etalons, an atom or molecule with an optical transition lying within the bandwidth of the laser will absorb some of the light associated with some of the frequency-comb teeth. To quantitatively determine each comb frequency’s intensity, the etalon optical outputs are combined onto a single photo detector. At the detector, the outputs interfere, producing a transient interferogram. Figure 1, a schematic of the spectrometer, shows the characteristic intensity ring down in time that each etalon generates, as well as the signal the combined etalon outputs generate. The spectrum is retrieved by Fourier transforming the interference pattern.

Sequential spectra can be obtained at chosen time resolutions by selectively Fourier transforming segments of the interferogram as the light “rings down” from the etalons—which occurs over 100 µs—because each interferogram time segment contains the entire spectrum. As such, DEFCOM can be thought of as a FT spectrometer that replaces an interferometer’s moving mirror with light moving back and forth between the etalon’s fixed mirrors. Because the light moves the equivalent of 30 km in the etalons within the 100 µs, DEFCOM enables users to obtain very high-resolution measurements in microseconds. In contrast, moving a mirror far enough to obtain similar resolution would take many minutes. Figure 2. Panel A is the interferogram obtained from a single DEFCOM spectrometer laser shot with two 5 µs Gaussian functions superimposed. Panels B and C are portions of the Fourier-transformed interferogram associated with the two Gaussian windows of panel A. Panel D is a plot of the intensity of two different modes at two different laser frequencies, with the slope giving the absorption coefficient at those particular frequencies.

Figure 2 illustrates data analysis. The first frame shows the interferogram. The next two frames show time-dependent spectra that were obtained by Fourier transforming the interferogram using the Gaussian windows centered at times 20 and 70 µs shown in the first frame. Plotting the features’ peak intensity in the spectrum as a function of time allows the user to determine each etalon mode’s ring-down decay rate (comb tooth). The last frame of Figure 2 provides two typical examples.

As demonstrated in Figure 3, plotting etalon mode decay rates yields a high-resolution spectrum. Specifically, Figure 3 shows spectra of the (1,1,3) vibrational overtone transition of water (H2O) and the R(7) transition of the weak gamma band of oxygen (O2). A single laser pulse with a 3 GHz broad spectrum provides the input light for the spectrometer. Given the etalons’ ~300 MHz resolution (spacing between etalon modes), a single laser pulse excites ~15 modes (see Figure 2B and C). Because the molecules are within the etalon cavities, they have an effective absorption path length of 30 km, giving very high sensitivity to the absorption measurement. Figure 3. Panel A is a cavity ring-down spectrum of water-saturated air around 628 nm. The laser is scanned to three different frequencies: (B) a background, (C) the (1,1,3) water transition and (D) the O2 transition. At each laser setting, an interferogram is recorded and high-resolution spectra are obtained.

The current version of the apparatus provides a 300 MHz resolution spectrum across the laser pulse bandwidth used to excite the etalons. Future versions will enable users to scan the etalon mirrors to obtain even higher resolution, as each comb tooth has a few-tens-of-kilohertz resolution.