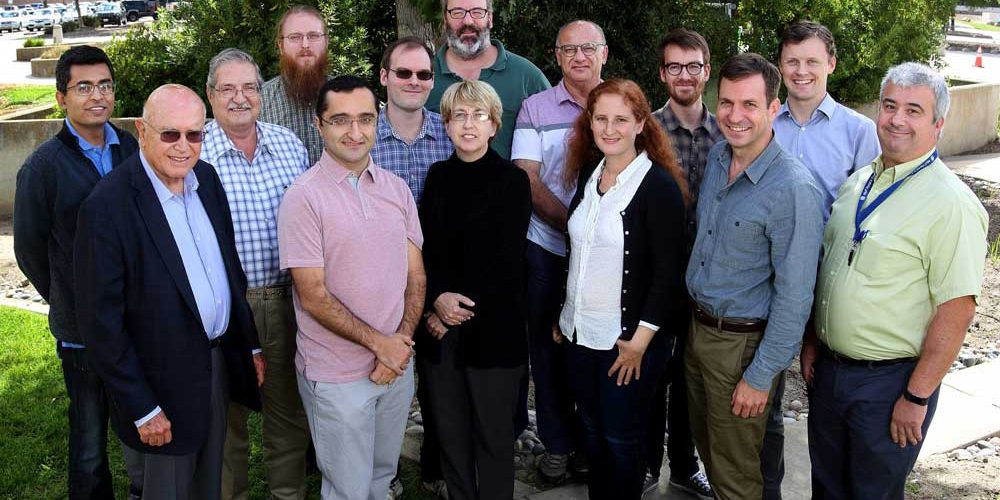 The Exascale Catalytic Chemistry project, a partnership with Sandia, Argonne, and Pacific Northwest national laboratories, and Brown and Northeastern universities, started in 2017 and brings together physical chemists and applied mathematicians to design computational tools that can take advantage of the world’s most powerful computers to speed up understanding of heterogeneous catalysis, a complex chemistry problem. The partnership was recently renewed for another four years.

Judit Zádor, the project director of Exascale Catalytic Chemistry, assembled the team of experts to develop models for heterogeneous catalysis — reactions of gas-phase molecules that take place on metal surfaces — faster and more reliably. “What this project brings to catalysis research, is that it tries to automate the creation of complicated models that are necessary to describe the complex chemistry between gases and the catalytic surface,” Judit said. “Even for seemingly simple systems, like the hydrogenation of CO and CO2, there can be many dozens of reactions that take place on a simple facet of a metal. This can grow to hundreds or more if we consider larger molecules and more complex surfaces.” With the new tools developed by the project, Judit’s team at Sandia and beyond can create models and simulate these reactions more easily and systematically.

“Our partners at Brown and Northeastern created a computer code that can enumerate the reactions and estimate their properties for you in a systematic way,” Judit continued. “At Sandia we then create codes to systematically, yet automatically, study these reactions using quantum chemistry. We also made simulation and analysis tools to interpret the models as a whole. Pacific Northwest National Laboratory contributes by its expertise in the underlying quantum chemistry method, while Brown, Argonne and Sandia jointly develop new methods to improve the thermochemistry.”

The project aims to give other researchers more accurate tools so they can more accurately predict focus experimental efforts on the most productive catalytic strategies. Judit said that finding which interactions are most important to model is akin to knowing which tree branch to prune for a desired shape. “On a catalytic surface there are always chemical pathways that end up where you do want, but there are pathways that end up with a product you don’t want,” she said. “If you imagine the tree, you can follow one branch to the right, and it leads to the right outcome, but follow to the left, and it leads to an undesirable outcome. If you have an automated tool and enough computational power, you can examine many more scenarios than traditionally theoretically or experimentally possible and help you understand what makes a catalytic reaction produce a given product.” This is particularly helpful to chemistry researchers because there are so many possible reactions to measure or calculate.

Funded by DOE’s Office of Science, Basic Energy Sciences, Chemical Sciences, Geosciences and Biosciences Division, the Exascale Catalytic Chemistry project team will study how the chemistry of a given molecule on a catalytic surface is altered by the presence of other molecules on a surface. “These so-called co-adsorbates change the outcome of the reactions, so they are important. However, setting up calculations for these systems leads to extreme complexity, because there are just too many ways in which these molecules can interact on a surface.” Judit said. “You can’t do that by hand, and it seems that you can’t do that by sheer computer power only either. We will have to use machine learning to leverage our computational frameworks. It’s an exciting challenge.”

See the full article in the Sandia Lab News.