Capturing the Moment of Hydrogen Ignition in the Turbulent Combustion Lab 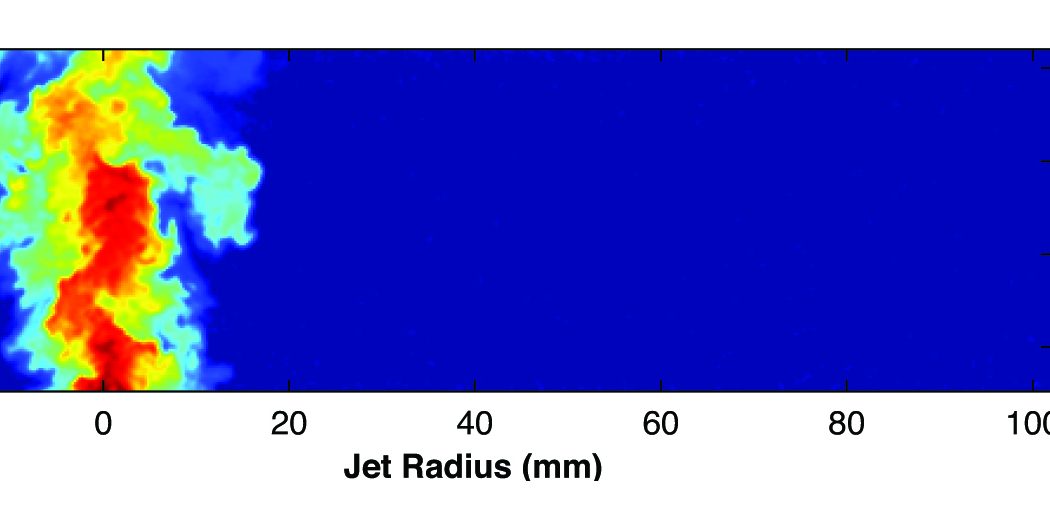 Hydrogen fuel cell-powered electric vehicles could be coming to a showroom near you in just a few years. Automotive manufacturers are perfecting their options, and with a plan to open 68 public hydrogen fueling stations by 2015, the State of California leads the nation in hydrogen vehicle infrastructure deployment.

A principal challenge to deploying the hydrogen refueling infrastructure is the need to reduce risks to personnel and bystanders to an acceptable level—a task that requires quantifiable data on the safety envelope for hydrogen. Looking to provide these data, CRF researchers Isaac Ekoto and Adam Ruggles have applied advanced laser-based diagnostics and imaging capabilities in the Turbulent Combustion Lab (TCL).

“Using hydrogen as a fuel presents some new storage challenges,” says Isaac. “To achieve sufficient energy density for transportation, hydrogen must be stored at extremely low temperatures or under very high pressure, so an unintended release will behave differently than gasoline.”

The conventional approach for establishing the separation distances between hydrogen and a potential ignition source is based on hydrogen’s lower flammable limit (LFL), considered an indication of the probability of ignition. Because hydrogen’s LFL is relatively high (at about 4%), resulting regulations essentially prohibit hydrogen infrastructure in densely populated areas.

However, these regulations fail to account for hydrogen’s unique characteristics, which include buoyancy and high diffusion rates. “In establishing safety distances for a hydrogen fueling station, the key metric is not ignition probability, but rather the probability of a sustained flame developing after ignition,” says Adam. “If you can demonstrate lower probability of sustained flame development with hydrogen, then separation distances can safely shrink.” To better understand potential hazards from releases, Isaac and Adam have examined well-characterized hydrogen jets in the TCL. Using custom burners to recreate representative hydrogen leaks and a laser spark apparatus to pinpoint ignition at various locations within the release plume, they’ve statistically characterized the plume and gained insight into the processes that occur during ignition and the transition to sustained flame light-up.

To ensure the controlled laboratory experiments preserve relevant flow physics expected from releases from compressed storage, Adam recently designed a high source pressure hydrogen jet and integrated it into the lab; a schematic of the stagnation chamber and representative schlieren images of the underexpanded jet-exit shock structure are included in Figure 1. The ability to study realistic release scenarios using state-of-the-art measurement tools distinguishes the TCL from similar labs around the world.

In a recent experiment, Adam and Isaac attempted to spark ignite the hydrogen jet at numerous locations and recorded whether the mixture ignited and whether ignition led to a sustained flame or was simply extinguished. Diagnostic capabilities enabled the researchers to freeze a moment in time and visualize the distribution of the flammable range; a sample instantaneous image is provided in Figure 2.

From their results, Adam and Isaac have identified the ignition probability for all locations of a given unintended hydrogen release and are working to develop validated methods for predicting flame light-up transition. Representing a tremendous technical advance over the current approach, their methods are providing a technical case for building stations with a smaller footprint—without compromising safety.

This research may also be of value in the materials-handling sector, where hydrogen fuel cell-powered forklifts use is growing rapidly. In a separate project, Isaac and recently retired Sandian Bill Houf examined the risks and potential impacts of an accidental release inside a warehouse. Testing different scenarios yielded noteworthy results.

“We found a critical period after a release that could last up to a minute in which the hydrogen was above the LFL before it diffused out,” says Isaac. “If the released gas came into contact with an ignition source within that window, things went bad quickly no matter what kind of ventilation system was in place.”

From this work, Adam and Isaac plan to develop a toolkit with quantitative risk analysis to aid hydrogen facility and system designers. “Each setup is unique, so rather than give specific parameters, the toolkit will enable operators to optimize their design using risk reduction strategies,” says Isaac. With sufficient funding, they hope to have a beta version ready within two years.

They have also started experiments on other fuels, such as liquefied natural gas, to refine the understanding of the flammable envelope. Other plans call for more closely replicating real-world releases by modifying the TCL’s setup, which currently includes only an unimpeded vertical jet. “We’d like to test different orientations and with barriers. It’s not likely a release will come from a perfectly concentric circle. Most cracks are elongated, and we don’t know how that changes the release,” says Adam. “We want to keep taking this one step closer to what could happen in the real world, outside of a lab.”