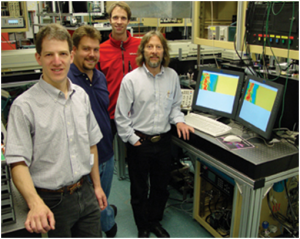 The Combustion Research Facility (CRF) is an internationally recognized Department of Energy Office of Science collaborative research facility. The CRF is home to about 100 scientists, engineers, and technologists who conduct basic and applied research aimed at improving our nation’s ability to use and control combustion processes. The need for a thorough and basic understanding of combustion and combustion-related processes lies at the heart of CRF research.

CRF research ranges from studying chemical reactions in a flame to developing an instrument for the remote detection of gas leaks. Most of the CRF’s work is done in collaboration with scientists and engineers from industry and universities. Visiting researchers have access to the CRF’s state-of-the-art facilities and expert staff, and bring with them experience and knowledge that enhances and brings new approaches to CRF projects.

CRF scientists pioneered the use of laser-based optical diagnostics, now essential for the study of combustion. Laser diagnostics allow researchers to nonintrusively observe and measure fleeting combustion events in a wide variety of environments, such as inside engines and burners. Labs containing state-of-the-art and custom-built lasers enable CRF and visiting scientists to employ any of the modern laser diagnostic methods in their combustion studies.

Capabilities originating in the CRF are being applied to other problems of national importance. For example, the CRF’s strength in laser diagnostics and chemical sciences is fundamental to Sandia’s µChemLab™ effort. Researchers are developing handheld chemical analysis systems for the detection of chemical warfare agents, protein biotoxins, and other chemical and biological compounds with defense, environmental, and medical applications.