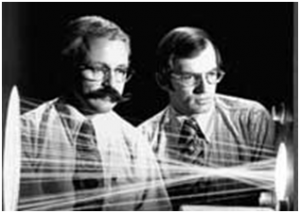 The origins of the Combustion Research Facility can be traced to a confluence of events occurring in the early 1970s. The country was experiencing an energy crisis. The OPEC oil embargo, long lines at the gas pump, and rationing caused the nation to direct its priorities toward reducing dependence on imported oil and improving the energy efficiency of automobiles.

At the same time, researchers working for Sandia and other national laboratories realized the potential of applying tools developed for nuclear weapons purposes to studying the complexities of combustion. Better knowledge of combustion processes could lead to more efficient and cleaner conversion of fuels to energy. At the time, automotive engineers did not have tools like lasers and supercomputers and little detailed information about combustion processes. 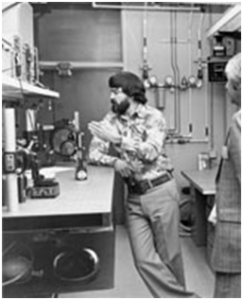 At Sandia’s Livermore facility, researchers Dan Hartley and Ron Hill were using lasers to investigate turbulent gas flow-information useful in the design of a type of weapon component. Using mirrors, they bounced laser light back and forth through a gas sample, then analyzed the light by Raman spectroscopy, a technique used to identify the chemical species within a gas. By examining the scattered beam after it passed through a flame, they could determine what kind of molecules constituted the flame and thereby gain insights into combustion events.

Noting the potential contributions of these tools and techniques toward a better understanding of combustion, Hartley, Bob Setchell and Taz Bramlette submitted a proposal in 1973 for a combustion research program at Sandia to the Atomic Energy Commission, which later became the Energy Research and Development Administration and then the Department of Energy. The proposal was later expanded to a national center for combustion research.

It took several years to gain support and approval for the proposal. In 1978, funding became available to begin work on the center. The CRF opened to researchers in 1980, with Hartley serving as its first director.

The combustion center became one of Sandia’s first “user facilities.” Located outside fences and classified weapon development areas, these facilities welcomed research participation by representatives from industry and universities. Then and now, the CRF conducts work in tandem with university and corporate researchers and provides opportunities for university postgraduate research. 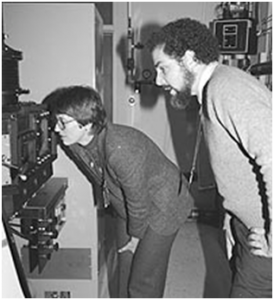 In response to user needs and newly emerging experimental technologies, a second phase opened in 1999, providing 16 additional labs and a new office wing. The 75,000-square-foot facility has a total of 36 labs.  To maximize the impact of rapid advances in computer technology and computational modeling capabilities, the CRF opened a new 8,000-square-foot computational laboratory building in 2010 to house local cluster computing, visualization facilities, and collaborative work space for computational researchers.

Over the years, CRF researchers and users have greatly expanded the fundamental knowledge of combustion processes and contributed to significant design innovations for diesel engines, pulse combustors for furnaces, and pollution reduction methods.