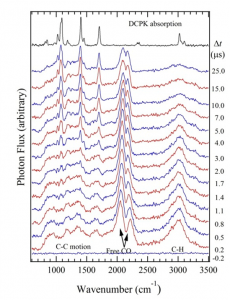 The time-resolved Fourier transform infrared emission spectrum of dicyclopropyl ketone after photodissociation with a 193 nm photon. Analysis of the spectra show that free CO is formed, which the C3H5 radical fragments isomerizes from the cyclic cyclopropyl radical to the resonance stabilized allyl radical.

Photodissociation may occur when a molecule absorbs a photon whose energy is greater than the bond strength of one or more bonds in the molecule. The energy deposited by the photon can cause the molecule to fragment, and in so doing, reveal many details about the forces that bind the atoms of the molecule together. Photodissociation dynamics experiments provide a direct means of studying the forces that act on a molecule during bond breaking. These experiments are a well-defined method for studying the fundamental nature of chemical reactions, in which we try to determine:

At the CRF, we use a variety of techniques to study photodissociation dynamics. One technique, ion imaging, was invented at the CRF, and has since become a ubiquitous technique for understanding not only photodissociation, but also bimolecular reactions and the characteristics of ultrafast lasers. We also use time-resolved Fourier transform spectroscopy to study the rotational and vibration state distributions of photodissociation products in real time as they are created and subsequently cooled via collisions.