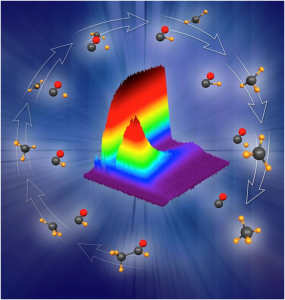 Time-resolved Fourier transform infrared spectra of acetaldehyde photodissociation at 308 nm are surrounded by snapshots from a quasi-classical trajectory calculation of the dissociation that demonstrations the roaming molecule mechanism.

The CRF experimental study, together with molecular dynamics simulations from Emory University, uncovered another process, in which the CH3 and HCO fragments have insufficient energy to separate completely. In this case, the two radicals “roam” around each other until they reach an appropriate configuration in which the CH3 radical can abstract the H atom from HCO, forming CH4 + CO. The spectra and calculations provide evidence that the newly formed CH4 molecule has an exceptional amount of vibrational energy, up to 95% of the C-H bond strength in methane.