Flames and other chemically reactive environments, such as internal combustion engines, are an interplay between chemical kinetics and collisional energy transfer. The chemistry provides the energy release to drive the coupled chemical reactions to completion and the energy transfer process maintains thermal equilibrium. A chemical reaction never produces products with Boltzman internal state (rotational, vibrational, and electronic energy) distributions or velocity distribution because the reactions happen on complex potential energy surfaces. Collisions subsequent to reaction product formation redistribute the energy among the possible degrees of freedom in an effort to maintain thermal equilibrium between all energetically accessible degrees of freedom. 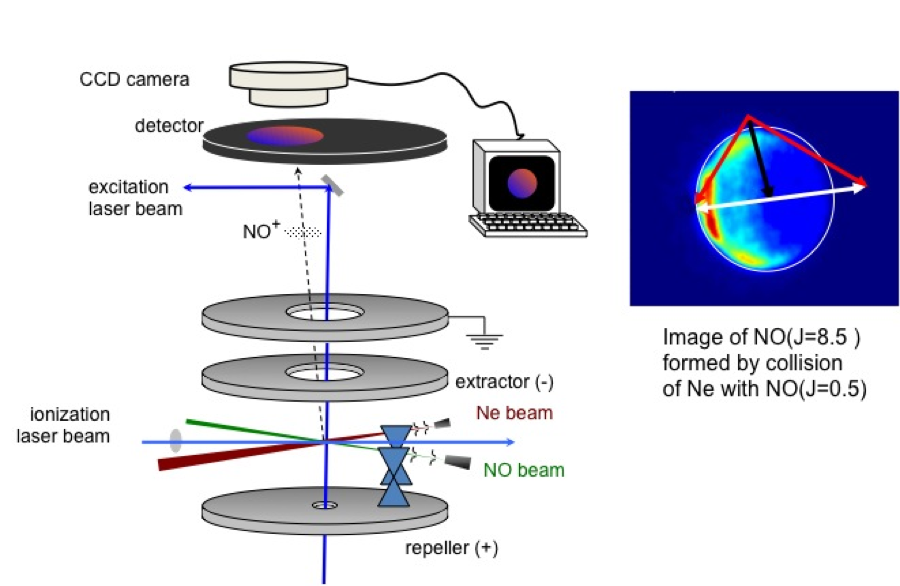 Schematic of scattering apparatus used to study collisional energy transfer under single collision conditions. A molecular beam of NO (j=0.5) seeded in argon atoms is crossed with an atomic beam of neon atoms. Upon collision, high rotational states of NO are formed. The laser ionizes the j=8.5 quantum state and those ions are recorded on a position-sensitive detector through some ion optics that convert the image into a velocity map of the fragments. The image that is recorded is shown in the upper-right-hand corner of the figure. The red arrows represent the velocities of the beams, the black arrow the velocity of the center of mass of the collision complex, and the white arrow the center of mass collision velocity.

Molecular beam scattering is used to study the collisional energy transfer process in great detail by looking at single-collision events. Two supersonic molecular or atomic beams are crossed in a high-vacuum apparatus at densities such that many single-collision events will occur at the crossing points of the beam but low enough density such that the probability of a single atom or molecule undergoing two collisional events is negligible. By using laser ionization spectroscopy to ionize a particular quantum state of the products of the scattering event and then by projecting those ions onto a position sensitive detector (velocity mapped ion imaging), one can learn much about the collisional energy transfer process. By looking at the angular distribution of the scattering products, we obtain the differential scattering cross section.  By observing the angular distribution changes in the scattering as a function of the ionization laser polarization, one can determine how the angular momentum vector of the rotationally excited molecules are aligned with respect to the incoming velocity vector. That is, are the molecules scattering away spinning as a Frisbee, a airplane propeller, or a bicycle wheel?  If one uses circularly polarized light for the detection, one can determine if the molecules are scattering clockwise or counterclockwise. If one excited the molecules in the molecular beam before the scattering event, then one can study the effect on the initial rotational, vibrational, or electronic state of the molecule. All of these processes have been studied at Sandia, and they provide a stringent test for the theory of collisional energy transfer.