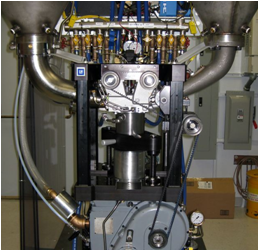 In order to reduce our dependence on petroleum and to reduce CO2emissions, it is important to both supplement traditional gasoline with renewable fuels and to improve the fuel efficiency of automotive engines. Under the Energy Independence and Security Act (EISA) of 2007, the volume of renewable fuel required to be blended into transportation fuel will increase from 9 billion gallons in 2008 to 36 billion gallons by 2022. At the same time, Federal Corporate Average Fuel Economy (CAFE) and greenhouse gas emissions standards require substantial reduction of the fuel usage per driven mile for model years 2012 through 2016. Thus, the industry is facing the difficult challenge of improving engine efficiency while the composition of gasoline-type fuel is changing.

The recently completed Alternative Fuels Direct-Injection Spark-Ignition (DISI) Engine Lab is designed to provide the scientific base necessary to help the automotive industry overcome the challenges associated with the newly adopted standards. The engine is based on the cylinder head and combustion system for an advanced spray-guided stratified-charge engine. This single-cylinder research engine has a bore of 86 mm and a stroke of 95 mm, for a swept volume of 0.55 liter. This would correspond to 2.2 liter swept volume in a potential 4-cylinder configuration. The engine can be operated in full metal configuration for extended performance mapping. It also offers extensive optical access to the combustion chamber for probing the in-cylinder processes. 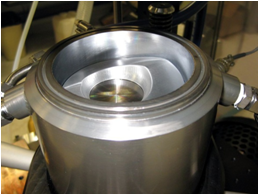 The ability of this engine to operate overall lean offers the potential for substantial improvement of thermal efficiency relative to the traditional port-injected stoichiometric gasoline engine. This is because with lean operation, the intake flow does not have to be throttled as much to control engine load, reducing the fuel economy penalty associated with the use of throttling for load control. However, operating the engine in an overall lean but stratified mode requires precise and robust control of fuel/air mixing and charge preparation to ensure that an ignitable and flammable mixture exists around the spark-plug gap at the time of ignition. This is particularly challenging for flex-fuel engines because the fuel properties vary greatly between traditional gasoline and alternative fuel blends. Take for example E85, which is an 85%/15% volume mix of ethanol and gasoline. To obtain the same engine torque, roughly 50% more fuel mass must be supplied in the case of E85 due to its high oxygen content. To fully understand the implications of the change of fuel type on the in-cylinder processes, a combination of laser-based flow-field and fuel-concentration measurements are being pursued. 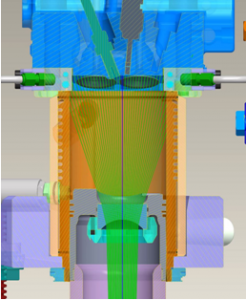 Another approach for improving the vehicle fuel economy is based on the use of engine “downsizing.” By equipping the vehicle with a smaller-displacement engine, the engine has to work with higher pressure on average, which reduces the need to throttle the intake air flow and the fuel efficiency losses associated with throttling. However, to ensure acceptable vehicle performance, the specific power output must be increased, typically by turbocharging. For such operation with high peak in-cylinder pressures, it is very important that the fuel has sufficient resistance to autoignition in order to avoid damaging engine knock. Fortunately, ethanol has very low autoignition reactivity (i.e., low knocking propensity), even under highly boosted conditions.  E85 can therefore enable aggressive downsizing to improve the fuel economy. Given the industry trend of ever more aggressive turbocharging, it is also very important to evaluate the autoignition reactivity of other alternative fuels that are proposed to displace gasoline. These aspects are being investigated using knock-detection in the all-metal configuration of the DISI engine, and by supporting measurements of autoignition reactivity performed in the nearby HCCI Fundamentals Lab at Sandia.

In summary, the Alternative Fuels DISI Engine Lab is providing the knowledge-base required by industry to develop high-efficiency engine technologies and suitable renewable alternatives to gasoline. The research is being accomplished through collaborations with engine manufacturers.