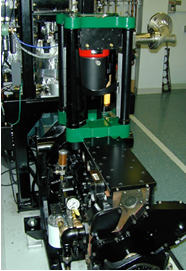 Homogeneous-charge compression-ignition (HCCI) engines can provide high, diesel-like efficiencies and very low emissions of NOx and particulate. In an HCCI engine, a dilute, premixed fuel/air charge autoignites and burns volumetrically as a result of being compressed by the piston. The charge is made dilute either by being very lean, or by mixing with recycled exhaust gases.

Researchers must overcome several technical barriers before HCCI can be implemented in production engines. Variations of HCCI in which the charge mixture and/or temperature are partially stratified (stratified-charge compression-ignition or SCCI) have the potential for overcoming many of these barriers. Because of HCCI’s high efficiency and low emissions, most automobile and diesel-engine manufacturers have established HCCI/SCCI development efforts. The HCCI/SCCI Laboratory supports this industrial effort by providing the science based understanding of the fundamentals of HCCI/SCCI required to develop these engines.

The laboratory is equipped with two Cummins B-series engines mounted at either end of a double-ended dynamometer. These production engines have been converted for single-cylinder HCCI/SCCI operation. One engine (the so-called all-metal engine) is used to establish operating points, test various fuel types, develop combustion-control strategies, and investigate emissions. The second engine has extensive optical access for the application of advanced laser diagnostics for investigations of in-cylinder processes. The design includes an extended piston with piston-crown window, three large windows near the top of the cylinder wall, and a drop-down cylinder for rapid cleaning of fouled windows. 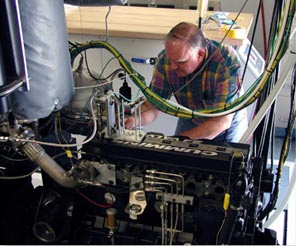 The engines are designed to provide a versatile facility for investigating a wide range of operating conditions and various fuel-injection, fuel/air/residual mixing, and control strategies that have the potential of overcoming the technical barriers to HCCI. The size of these engines (0.98 liters/cylinder) was selected so that results are applicable to both automotive and heavy-duty applications. They are equipped with the following features:

Investigations are addressing several issues, including:

Because fuel characteristics are central to HCCI engine design, a variety of fuels are being examined including gasoline, diesel fuel, bio-derived fuels, alternative petroleum-based fuels, and a number of representative constituents of real distillate fuels.