Turbulence models typically involve coarse-graining and/or time averaging. Though adequate for modeling mean transport, this approach does not address turbulence-microphysics interactions that are important in combustion processes.  Subgrid models are developed to represent these interactions.

The CRF has developed a fundamentally different representation of these interactions that does not involve distinct coarse-grained and subgrid models. It involves an unsteady numerical simulation implemented in one spatial dimension, with full spatial and temporal resolution of microphysical processes. Microphysics such as diffusive transport and chemical kinetics are represented by computing the time evolution of these processes based on the governing equations. The advective terms in these equations, and in the momentum equation, are represented by a random process formulated so that it displaces fluid without changing fluid properties. (In contrast, coarse-graining methods generally represent fine-scale advective motions as diffusive processes that mix fluid, and therefore change the properties of individual fluid elements.) This approach provides a framework for physically sound representation of the interactions between fine-scale advective motions and diffusive and other microphysical processes.

The approach is illustrated by a simulated 2D rendering of the instantaneous structure of a turbulent jet diffusion flame. The configuration that is simulated is a piloted methane-air diffusion flame studied experimentally in the Sandia Turbulent Combustion Laboratory. 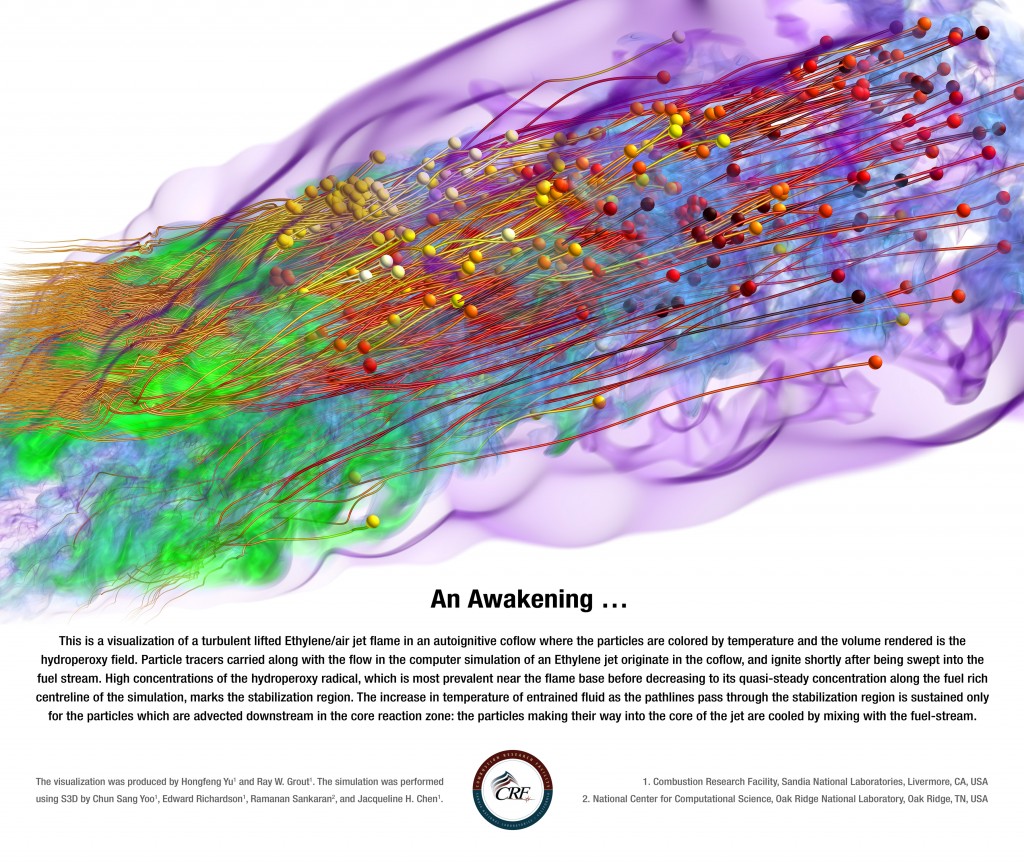 In the illustration, the rendering of the instantaneous OH mass-fraction field (left) is compared to an average over 100 simulations (right). The instantaneous field captures details not seen in the ensemble averaged rendering. The renderings are obtained by taking the 1D computational domain to represent the y axis (scaled by inner-flow diameter d). Temporal evolution of the 1D simulation is converted to distance downstream of the jet inlet, corresponding to the x axis (scaled by d).

Horizontal line segments on the instantaneous rendering denote stirring events that represent turbulent eddies in the simulation. The spatial fluctuations of the OH concentration field reflect the coupled effects of stirring and chemistry, here using a ten-step reduced mechanism. Although the locations and sizes of the events are selected by a random process, the selection process is influenced by a velocity profile that evolves during the simulation. This formulation captures some of the spatio-temporal correlations and other known features of turbulent flows.

The onset of turbulence along the fluid interfaces of highest shear (i.e., the shear layers where the inner flow meets the slower pilot flow, and where the pilot flow meets the weak outer flow) is evident. Between the high-shear regions, the nonturbulent core of the inner jet and of the pilot flow is delineated. (This simulation assumes laminar inflow, but turbulent inflow can also be simulated.) Farther downstream, the merging of these regions, the onset of a ‘turbulent cascade’ (with smaller eddies trailing larger ones), and associated ‘spatial intermittency’ are seen.