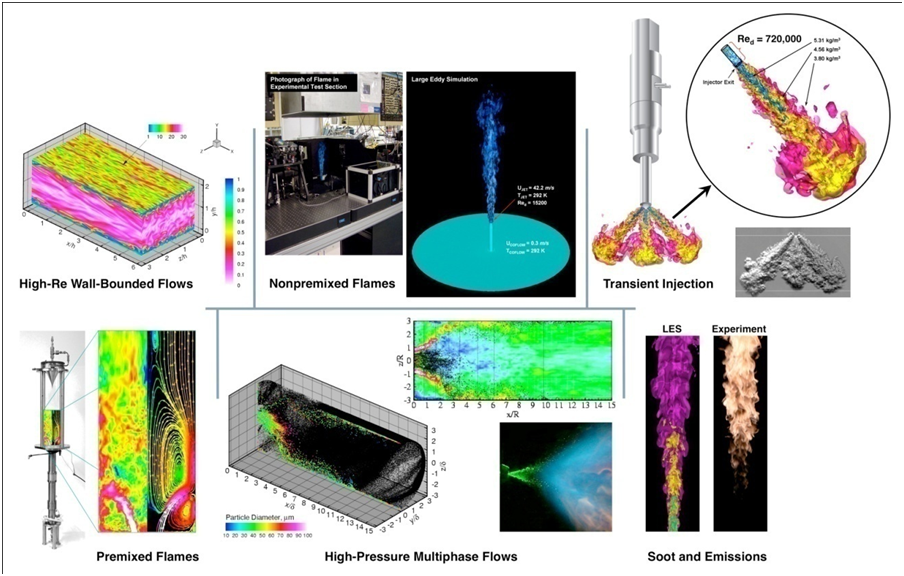 The combination of high-performance computing (HPC) and the large eddy simulation (LES) technique has significant potential to provide new insights into the dynamics of many types of turbulent combustion processes. The objective of LES development at the CRF is to fully integrate the combined merits of HPC and LES in a manner that provides some of the highest-fidelity, most detailed calculations ever performed with emphasis on two complementary projects. The first is funded by the DOE Office of Science, Basic Energy Sciences program, and focuses on LES of turbulence-chemistry interactions in reacting multiphase flows. The second is funded by the DOE Office of Energy Efficiency and Renewable Energy, Vehicle Technologies Program, and focuses on the application of LES to low-temperature and diesel engine combustion research. Objectives and milestones for both projects are aimed at establishing high-fidelity computational benchmarks that match the geometry and operating conditions of key target experiments using a single unified theoretical-numerical framework. The projects are complementary in that the one provides the basic science foundation for detailed model development and the other provides the foundation for advanced engine research.

In addition to developing a unique massively parallel multiscale modeling framework based on LES, we have established direct collaborations with two of the core experimental programs at the CRF. A scientific foundation for development of advanced subgrid-scale models for LES has been established as a direct extension of the International Workshop on Measurement and Computation of Turbulent Nonpremixed Flames (i.e., the TNF Workshop). Similarly, collaborative research activities have been established that focus on key optical engine experiments and model validation using the Engine Combustion Network (ECN). The ECN has analogous objectives to those of the TNF workshop. The primary goal is to establish direct one-to-one correspondence between measured and modeled results by performing detailed simulations that incorporate the fully coupled dynamic behavior of a given configuration in the full experimental or device-scale geometry without canonical approximations. The integrated set of tasks provides an optimal combination of fundamental and applied research aimed at the development of predictive models for a variety of propulsion and power devices.