This work was an international collaboration with Hatem Selim and S. Mani Sarathy of King Abdullah University of Science and Technology in Saudi Arabia; Katharina Kohse-Höinghaus of Bielefeld University in Germany; Philippe Dagaut of the Centre National de la Recherche Scientifique in France; Denisia Popolan-Vaida and Stephen Leone of the University of California, Berkeley and Lawrence Berkeley National Laboratory (LBNL); and Pascal Diévart and Yiguang Ju of Princeton University.

Understanding the low-temperature combustion (LTC) chemistry of transportation fuels is increasingly important because innovative engines, such as homogeneous charge compression ignition (HCCI) engines, rely on the control of low-temperature ignition timing. DME, a proposed alternative or additive to conventional diesel fuel, has a very simple molecular structure (CH3OCH3) with rich low-temperature chemistry. However, recent experiments clearly showed that the description of DME’s low-temperature chemistry contained some uncertainty in the decomposition pathways and the branching ratio of the elusive keto-hydroperoxide species.

The first detection of this important intermediate in DME’s LTC regime was made possible by coupling two tools:

Combined, this apparatus allowed the international research team to simultaneously detect many intermediates, including radicals and other very reactive species, such as peroxides. Coupling the mass spectrometer to a tunable vacuum-ultraviolet photon source, such as the chemical dynamics beamline at LBNL’s Advanced Light Source, enabled recording of so-called photoionization efficiency (PIE) curves that permit species identification based on their mass-to-charge ratio (m/z) and their ionization thresholds.

Specifically, the team identified HPMF on the basis of experimentally observed ionization thresholds and fragmentation appearance energies, interpreted with the aid of ab initio calculations. The JSR-sampled PIE curve is shown in Figure 1 for m/z = 92.011 u (C2H4O4). Also shown are curves for m/z = 91.003 u (C2H3O4), m/z = 64.016 u (CH4O3), and m/z = 59.013 u (C2H3O2), which were identified as fragments (-H, -CO, -HO2) caused by dissociative ionization processes. It can be seen that the experimentally determined onsets of the PIE curves of the fragments are in good agreement with the calculated values.

Interpreting the experimentally observed ionization thresholds required theoretical characterization of multiple HPMF conformeric structures. This important finding indicates that the usual strategy of considering only the lowest-energy conformer might lead to a significantly different prediction for the observable ionization threshold and thus to potentially erroneous isomeric assignments.

The team’s experiments also detected HC(O)O(O)CH (formic acid anhydride), HC(O)OOH (performic acid),and HOC(O)OH (carbonic acid). Though all are conceivable HPMF decomposition products, they are not included in many DME oxidation mechanisms. The appearance of the carbonic acid might be explained by a decomposition mechanism that was postulated by Korcek and coworkers (see Figure 2) and predicted theoretically. The team’s finding of the PIE curve for m/z = 62.000 u, which allowed them to identify carbonic acid as an intermediate, is the first experimental evidence for this proposed reaction. However, more definitive conclusions would require detailed modeling studies.

Future work will focus on providing mole fraction profiles of the identified species as function of initial flow conditions, residence time, and temperature. Such data will, in turn, become the ultimate validation target for developing chemical models for low-temperature oxidation and will thus help to identify important oxidation pathways. 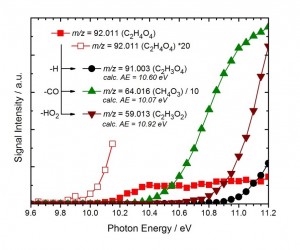 Figure 2: Graphical description of the Korcek decomposition mechanism of the HPMF molecule. The identification of carbonic acid [HOC(O)OH] as an intermediate might be explained by this pathway, thus providing detailed information needed for chemistry model development.