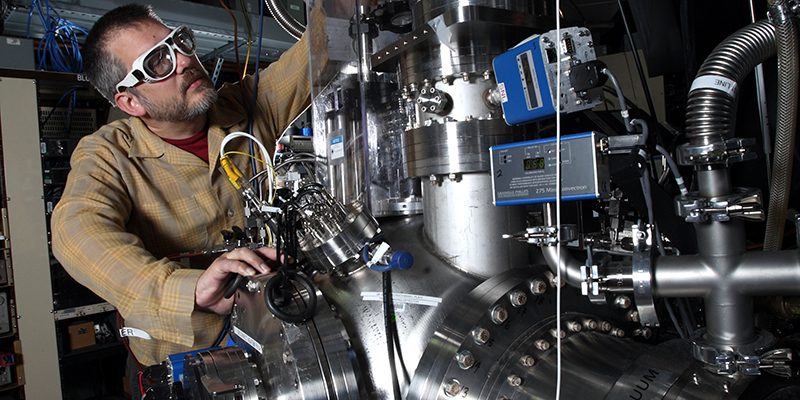 Researchers at Sandia National Laboratories’ Combustion Research Facility, the University of Manchester, Bristol University, University of Southampton, and Hong Kong Polytechnic have successfully measured reaction rates of a second Criegee intermediate, CH3CHOO, and proven that the reactivity of the atmospheric chemical depends strongly on which way the molecule is twisted. The measurements will provide further insight into hydrocarbon combustion and atmospheric chemistry. A paper describing the research findings titled “Direct Measurements of Conformer-Dependent Reactivity of the Criegee Intermediate CH3CHOO” is featured in the April 12 edition of Science magazine. Craig Taajes is the leader of an international collaboration which recently published their second article in Science concerning their research into Criegee intermediates and their reactivity.

Hydrocarbons that are emitted into Earth’s troposphere, either naturally or by humans, are removed by many reactive atmospheric species. For unsaturated hydrocarbons—molecules with at least one C=C double bond—a prominent removal mechanism is reaction with ozone. It is accepted that this reaction, ozonolysis, produces other reactive species, carbonyl oxides, which are known as Criegee intermediates after Rudolf Criegee, the German chemist who first unraveled the mechanism of ozonolysis in the 1950s.

Because so much ozonolysis happens in the atmosphere, the reactions of Criegee intermediates are thought to be very important in a wide range of tropospheric processes like secondary aerosol formation and nighttime production of highly reactive OH radicals. As a result, the chemistry of these reactive Criegee intermediates has been the subject of intense investigation for decades, but without any direct measurement of their reaction rates until work by Sandia researchers Craig Taatjes, David Osborn, and their collaborators published last year in Science magazine. Those investigations used a new reaction scheme to directly produce a Criegee intermediate without ozonolysis, and employed tunable synchrotron photoionization (at Lawrence Berkeley National Laboratory’s Advanced Light Source) to characterize the simplest Criegee intermediate, CH2OO, and to follow its reactions.

The measurements showed that Criegee intermediate reactions with some key atmospheric species were much different than previously thought—the reaction with sulfur dioxide (SO2) is up to 10 000 times faster than atmospheric models had assumed. These surprising results have started a vigorous reinvestigation of our understanding of ozonolysis and the subsequent tropospheric chemistry.

Now Taatjes, Osborn, and their Sandia colleagues Oliver Welz, Arkke Eskola, John Savee, and Brandon Rotavera, working with Carl Percival from the University of Manchester, Dudley Shallcross from the University of Bristol, John Dyke and Ed Lee from Southampton University, and Daniel Mok from Hong Kong Polytechnic, have extended their Criegee production scheme. They succeeded in measuring reactions of the next larger Criegee intermediate, CH3CHOO, in which one of the hydrogen atoms in CH2OO is replaced by a methyl (CH3) group.

The two distinct conformations of the CH3CHOO molecule.

The measurement of reactions of CH3CHOO is an important breakthrough for another fundamental reason—with the substitution of a methyl group for one hydrogen, the Criegee intermediate can now adopt two distinct conformations: the O-O group can point toward the methyl side (syn-) or away from the methyl side (anti-).

Because these two conformers do not readily interconvert, they are isomers of each other: chemically distinct molecules that are made up of the same atoms but in a different arrangement. Moreover, the reactivity of these two isomers of CH3CHOO with some species, especially water, has been predicted to vary dramatically depending on the anti- vs. syn- structure. The method that Taatjes, Osborn, and their colleagues use to follow the reactions of Criegee intermediates, tunable synchrotron photoionization mass spectrometry, can distinguish isomeric species on the basis of differences in their photoionization spectra. It usually takes a higher energy photon to remove an electron from one isomer (to ionize it) than it does to ionize another, and the dependence of ionization on photon energy will differ for different isomers.

Taatjes and coworkers realized, by comparing their photoionization spectra of CH3CHOO with high-level quantum chemistry calculations from their collaborators in Southampton and Hong Kong, that the two conformers of CH3CHOO were different enough in their photoionization behavior to be experimentally distinguished. Tuning the ionization photon energy just below the energy needed to ionize the syn– conformer would ionize only the anti– conformer, and measurements taken at a photon energy well above the ionization energy of both conformers would arise predominantly from the syn– conformer, which was produced in much higher abundance in their experiments. Taatjes, Osborn and their team demonstrated that the anti- conformer of CH3CHOO has a markedly higher rate coefficient for reaction with SO2 than does syn-CH3CHOO.

The reactivity of the Criegee intermediate species has been predicted to depend on its substituents, but before this work, calculations of this dependence have had no anchor in experiment. The present work allows the first direct test of theoretical predictions—not only of the effects of methyl substitution but of the surprisingly large effects of which side of the molecule the methyl group is placed (syn– or anti– to the O-O group). This work will be of tremendous importance in validating the theoretical methods that will be needed to accurately predict the kinetics for reactions of Criegee intermediates that remain inaccessible.

In fact, the new results of Taatjes et al. supply one of the most critical targets for such a validation. Because of the large concentration of water in Earth’s atmosphere, Criegee concentrations and hence the tropospheric implications of all Criegee intermediate reactions depend on knowing the rate constant for reaction with water. Unfortunately, the reactions for most Criegee intermediates with water may simply be too slow to be measured by the methods of Taatjes, Osborn, and coworkers. However, anti-CH3CHOO has been predicted to have a vastly enhanced reactivity with water. Taatjes et al. have confirmed this prediction by experiment and have made a direct measurement (not merely an upper limit) of the rate coefficient for reaction of anti-CH3CHOO with water. This result is the first experimental benchmark for the reaction of a Criegee intermediate with water.