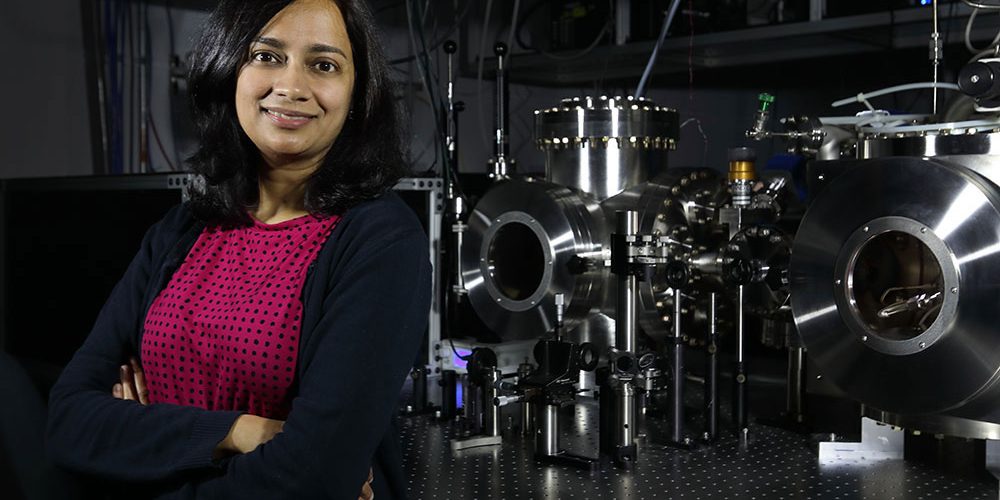 Each year, the Department of Energy awards five-year, $2.5M, Early Career Award grants to young scientists, chosen through a highly competitive research proposal selection process. For CRF scientist Krupa Ramasesha, winning the  Department of Energy’s Early Career Award means that she can launch an in-depth study of how the unique interactions of nanoparticles with light drives chemistry.

“I am thrilled to receive this award, because it will allow me and my team to focus a large portion of our efforts on expanding our research program to tackle important problems at the frontiers of photocatalysis and interfacial chemistry,” says Ramasesha. The project, Unraveling the Ultrafast Chemical Dynamics Governing Non-Equilibrium Molecule Nanoparticle Interactions, is now fully funded for the next five years, thanks to Ramasesha’s dedication and curiosity, and the DOE Early Career Award program.

This plasmon resonance decays rapidly by transferring energy and charge to its surroundings. When molecules are adsorbed on the surface of these metallic nanoparticles, such charge and energy transfer processes can trigger chemical transformations (e.g., bond breakage) in the adsorbed molecules, thus initiating reactions.

She believes this insight will help advance the field of plasmonic photocatalysis, where plasmonic metal nanoparticles are used as antennas for absorbing and channeling solar radiation to drive chemical reactions. “There are numerous open questions surrounding the nature of electronic interactions and the mechanisms for energy and charge transfer between molecules and nanoparticles,” Krupa added. “We will address these questions using a combination of cutting-edge X-ray and infrared spectroscopies, which can monitor the transfer of charge and energy with site-specificity, on the natural, femtosecond to picosecond (one quadrillionth to one trillionth of a second) timescales characteristic of electronic and atomic motion.”

Ramasesha believes this exciting new research path will provide an opportunity to help address the climate crisis, in some small way. “It would be terrific if we are successful in resolving the mechanisms of charge and energy transfer between metallic nanoparticles and molecules, as this could inform how tailoring the properties of nanoparticles and light excitation can selectively drive certain chemical reactions,” says Ramasesha.  “Many steps down the line into the future, this could help alleviate the considerable dependence on fossil fuels for driving industrial chemical reactions at high temperatures. The long-term aspiration is to provide a scientific knowledge base required to scale up plasmonic photocatalysis such that solar radiation can be efficiently harnessed to drive large-scale chemical reactions.”