on April 22, 2015 By Tara In Blog, Combustion Chemistry, Diagnostics, Working with the CRF Comments Off on Dual-Resolution Raman Spectroscopy Allows Simultaneous Measurement of Multiple Hydrocarbons

Working with Bob Harmon and Rob Barlow, the CRF’s Gaetano Magnotti has implemented a method of dual-resolution Raman spectroscopy that involves collecting hydrocarbon signals in the C-H stretch region using a second detection system (in addition to the normal Raman detection system) that is fitted with a high-dispersion grating. By better isolating the features of different hydrocarbon signals, this new method will help researchers achieve a long-term goal of simultaneously measuring multiple hydrocarbons, including combustion intermediates, in turbulent flames. In turn, these novel measurements will lead to better understanding of the combustion behavior of fuels such as dimethyl ether (DME), a potential lower-emissions alternative to diesel fuel that can be synthesized from a variety of sources, including biomass and natural gas [1].

Because of its promise, DME has been an important target for turbulent-flame measurements that can be used to test computational combustion models. Although a small hydrocarbon, just two methyl groups bonded to an oxygen atom, DME presents significant new challenges for optical diagnostics because methods must account for multiple intermediates associated with DME combustion.

Groundwork to overcome these challenges has included measuring spontaneous Raman scattering spectra of the species of interest (DME, CH4, C2H6, C2H4, C2H2, and CH2O) over a range of temperatures. These measurements were performed first at low spectral resolution by Frederik Fuest (then a visiting student from the group of Andreas Dreizler at TU Darmstadt) and Isaac Ekoto. The measurements were later repeated at much higher spectral resolution (see Figure 1) by Gaetano Magnotti in collaboration with Utsav KC and Philip Varghese from the University of Texas at Austin. Gaetano has used these high-resolution spectra to generate temperature-dependent spectral libraries for processing Raman scattering data from laminar and turbulent flames.

The main signals from each hydrocarbon, except acetylene (C2H2), are in the C-H stretch region of the spectrum (Raman shifts between 2700 and 3100 cm–1). However, the spectral resolution of our normal Raman detection system is much lower than that shown in Figure 1 because the dispersion of the grating is lower and the scattered spectra are convolved with the spatial image of the laser beam. This causes significant overlap and crosstalk among the various hydrocarbons, which complicates data interpretation.

As noted above and illustrated in Figure 2, the CRF has achieved better isolation of spectral features of different hydrocarbons by installing a high-dispersion grating (0.43 vs. 3.0 cm–1/pixel) in our second Raman/Rayleigh detection system. This is an alternative to the configuration introduced in the CRF News in February 2014, which featured identical gratings in two matched detection systems and used a polarization separation and subtraction technique to reject fluorescence interferences [2]. Switching between the two alternative configurations of the second detection system is relatively easy.

Current CRF work is focused on extending the spectral libraries for the hydrocarbons listed in Figure 2 to flame temperatures by extrapolating the fitted trends in high-resolution spectra. These extended libraries are being tested by comparing measured and calculated species concentrations in laminar premixed and partially premixed flames of the hydrocarbon fuels. The dual-resolution approach will then be applied to turbulent DME jet flames.

Figure 2. (a) Alternative configuration (right) of the second Raman detection system, which uses a high-dispersion holographic grating to spread the C-H stretch region of the spectrum across the full width of the charge-coupled device. 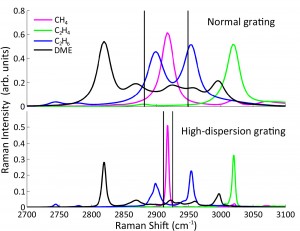 Figure 2. (b) Comparison of room-temperature hydrocarbon spectra measured with the two gratings. The width of each strong feature corresponds mainly to the width in camera pixels of the imaged laser beam, which is the same for both systems.

A recently published article describes related work on Raman scattering measurements of C2H2 in laminar and turbulent DME flames [3]. In this work, the temperature-dependent Raman cross-section measured by Isaac Ekoto was extended to higher temperatures using a modified harmonic oscillator model. Raman scattering from acetylene’s carbon-carbon triple bond appears near 1974 cm–1 and is isolated from the spectra of other major combustion species. Thus, the original detection system is used to measure CO2, O2, C2H2, CO, N2, H2O, and H2 in the dual-resolution experiments, while the remaining hydrocarbons are detected by the second detection system using the high-dispersion grating.

We are also working toward quantitative Raman measurements of formaldehyde (CH2O), an important intermediate in DME flames that can be detected near 2780 cm–1 in the C-H stretch region. Measurements of the Raman spectra of formaldehyde were pursued after evidence of CH4 and CH2O as pyrolysis products appeared in the spectra of heated DME. These features are identified in the 860 K DME spectrum in Figure 3a. Formaldehyde spectra at lower temperatures were obtained by subsequent cooling and nitrogen dilution of the pyrolysis gases. The spectra are quite noisy, due to the low (and unknown) formaldehyde concentrations, but there is potential to achieve quantitative results. 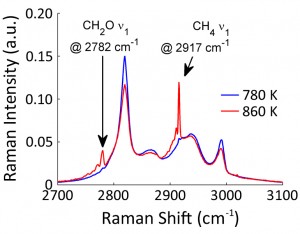 Figure 3 (a) Comparison of measured spectra from heated flows of DME at 780 K and 860 K, where pyrolysis products methane and formaldehyde begin to appear. 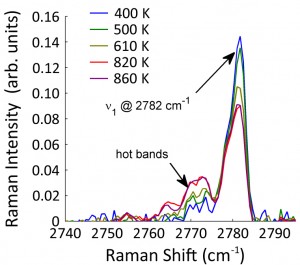 Figure 3 (b) Formaldehyde spectra after subtraction of the DME contribution.