on December 15, 2014 By eciscomm In Blog, Combustion Chemistry, Diagnostics Comments Off on First Ever Single-Shot Planar CARS Interrogation Spans an Unprecedented 4200 cm–1 Bandwidth

By Alexis Bohlin and Christopher Kliewer

Coherent anti-Stokes Raman spectroscopy (CARS), one of the genuinely optical diagnostic techniques in combustion research, has emerged over the years by detailing chemically reacting flows and has been vitally important in validating combustion model grid data. As valuable as it is, however, CARS presents drawbacks. For example, the conventional setup, which includes multiple laser beams, imposes a high level of complexity to perform a successful experiment. Further, as typically used, CARS provides single-point measurements—which fall short of the spatially correlated information needed to fully characterize multi-dimensional reacting flows.

Figure 1 outlines the method for generating and detecting a 2D CARS signal using the two-beam CARS phase matching scheme.2 Specifically, a femtosecond (fs) combined pump/Stokes beam is focused to a thin sheet, impulsively exciting the molecules across a planar spatial region. A narrowband picosecond probe beam intersects this region, generating a CARS signal from each spatial location within the plane. This signal-generation plane is relay-imaged through the grating onto the face of a charge-coupled device (CCD) camera. In this way, each gas-phase Raman transition frequency gets mapped to a different position on the detector. 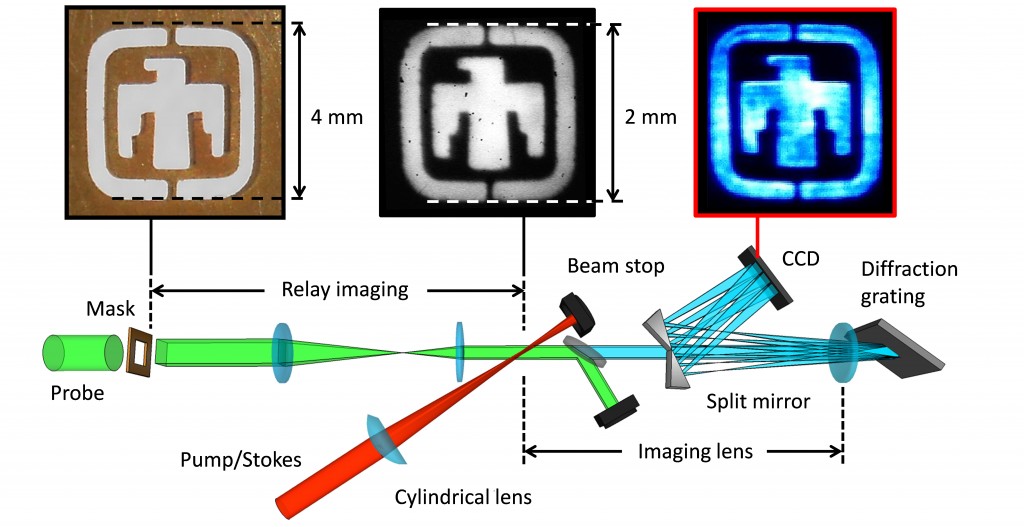 Figure. 1. Experimental setup for instantaneous planar coherent Raman spectroscopy. The signal generation follows the two-beam CARS phase-matching scheme, intersecting the probe and the pump/Stokes beams in a plane-geometry of ~ 2 × 9 mm. Either a short-pass frequency filter or polarization gating can isolate the generated CARS light from the probe beam. The signal is dispersed with a 3600 l/mm diffraction grating at Littrow’s angle, and imaged onto the CCD camera via double-passing a single-effective lens. A linespread function of less than 60 µm has been measured, quantifying the imaging quality.

The technique was first demonstrated in a flame by imaging the pure-rotational manifold of N2 and O2. Because most gas-phase rotational transitions have very narrow isolated spectral lines, developers designed the spectrometer to detect each Raman transition within a single pixel on the CCD. As a result, no convolution exists between space and frequency within the CARS image, allowing for a simple pixel-to-pixel extraction method to recover the CARS intensity spectra. As an example, 2b within Figure 2 (which provides spatial maps of specific S-transitions) clearly shows that the high rotational states of the N2 molecule become populated by the progress and energy release of the combustion reaction. 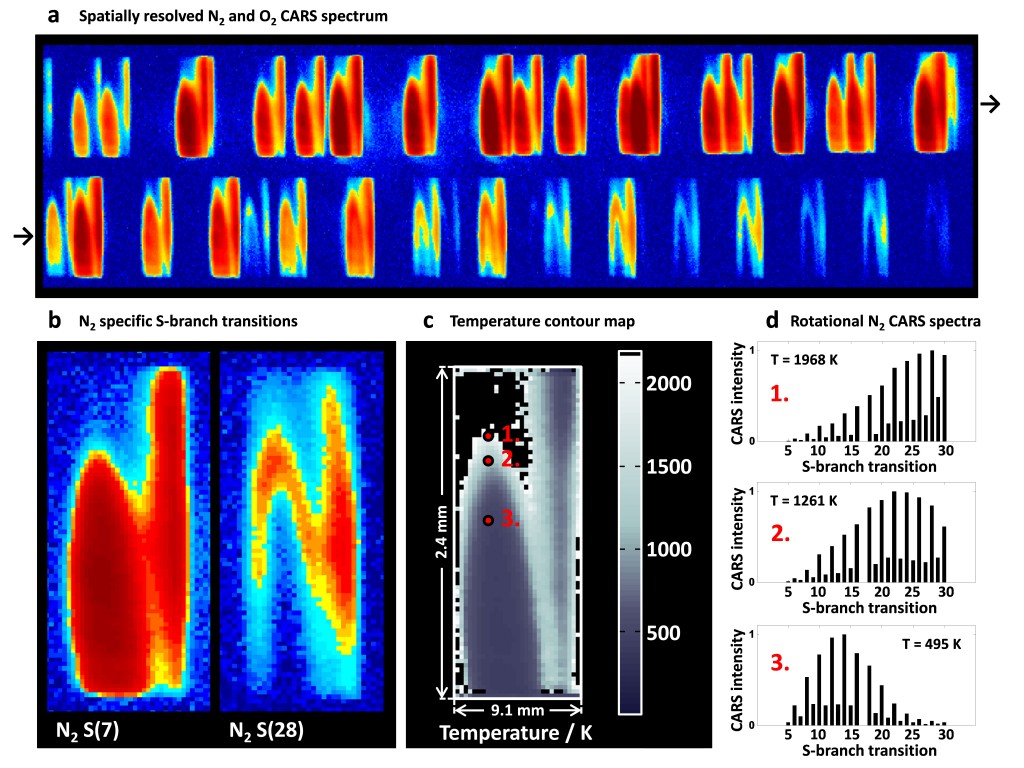 Figure. 2. Spatial maps of specific S-transitions and the derived temperature contour. a. A spatially resolved planar CARS signal as it is dispersed and detected on the CCD. The folded spectrum extends two horizontal rows and consists of many fully isolated N2 and O2 S-branch transitions. The pixels in each of the individual transitions map a specific spatial location in the probed field. b. Two specific N2 S-transitions, which belong to a low (J = 7) and high (J = 28) initial rotational quantum state, respectively. The intensity depends on the thermal population of the specific states involved, governed by the different zones of the reaction. c. Derived temperature map ranging from 450 K to ~2000 K, extending a view of 2.4 × 9.1 mm in the flame. d. Examples of rotational N2 CARS spectra originating from a specific spatial location, extracted as the pixel-to-pixel values of each respective transition.

Because the pump and Stokes fields are automatically overlapped in time and space in the two-beam CARS phase-matching arrangement, robust use of ultrashort pulses (< 8 fs) becomes feasible. These pulses in turn create ultrabroadband excitation of CARS resonances, allowing detection of not only multiple manifolds within the same molecule (e.g., the S-branch and the Q-branch of N2), but also many different molecules simultaneously.

In fact, Bohlin and Kliewer recently demonstrated the 2D-CARS hyperspectral spectrometer over a bandwidth of 4200 cm–1. This coherent Raman planar imaging of quantum state-resolved spectra of many molecules opens many new directions in combustion research. For instance, Figure 3, which displays an image taken within a single laser shot of the O2 Q-branch overlaid with the H2 S(3) transition acquired in a H2-jet diffusion flame, shows oxidizer and fuel spatial distributions as they are consumed in the combustion process. Such complementary multiplex detection should enable direct determination of  the instantaneous mixture fraction, a key turbulent-combustion modeling parameter, with no need to add tracers that can change the combustion chemistry.

Figure. 3. Instantaneous multiplex imaging of reactants O2 (green) and H2 (red), in a combustion flow, as imaged with the signatures of the O2 Q-branch and the H2 S(3)-transition.