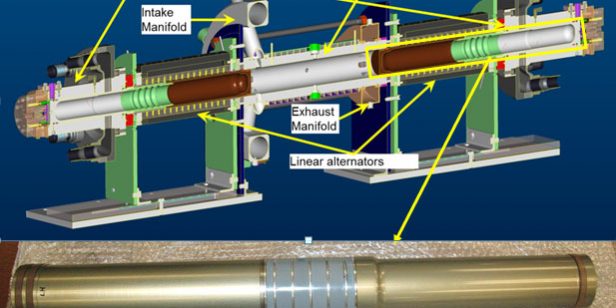 A Sandia team is pursuing a novel route to hybrid-electric vehicles: the free-piston engine. So called because the piston is not mechanically linked to other engine systems, such as the crankshaft, the free-piston engine may provide greater efficiency than its conventional diesel and gasoline counterparts. Fueled by renewably sourced hydrogen, it also could one day make a carbon-neutral debut by replacing the gasoline engine in hybrid-electric vehicles. As an added benefit, the free-piston engine can take advantage of the considerable expertise and infrastructure built up for the internal combustion engine.

Under the sponsorship of DOE’s Vehicle Technologies Office, a Sandia team composed of Terry Johnson, Mike Leick, and Yon Perras (now retired) explored the still-developing technology by building and testing a free-piston engine. Results are providing valuable information for other designers—and particularly for project partners GM and the University of Michigan, who have used Sandia’s data to help calibrate a free-piston engine design model.

The design for Sandia’s engine, developed by retired Sandian Peter Van Blarigan, called for homogeneous charge compression ignition (HCCI) combustion, a highly efficient technology that compresses a mixture of fuel and air to the point of auto-ignition, obviating the need for the spark plug. Driven toward each other by a bounce chamber system, the two opposing pistons create the compression needed for auto-ignition of the fuel in the central combustion chamber.

The designers also chose an opposing piston configuration; single-piston designs are also common. “In the opposing-piston design, two pistons move toward each other within a cylinder where fuel is injected, creating high enough pressures and temperatures to trigger auto-ignition,” explained Terry. “The explosion drives the pistons away from each other toward pneumatic bounce chambers, which then push the pistons back together to start the cycle over again.” The mechanical energy from the engine is converted to electrical energy by linear alternators, formed from the magnetized pistons and windings surrounding the cylinder.

Testing of the prototype, which began in 2012, was geared toward demonstrating the free-piston engine’s high efficiency and low emissions. Another objective was to show that this type of engine could be relatively simply to build, with no mechanical complexities.

Demonstrating the Potential for Efficiency

The team found that the prototype could achieve close to 30% efficiency, which compares favorably with the 25% efficiency expected for typical diesel or gasoline engines coupled to a generator/alternator. Terry explained that the efficiency results were a blend of two different kinds of efficiency: thermal efficiency, a measure of the work generated by burning the fuel, and mechanical efficiency (which includes alternator efficiency), a measure of how well the work produced is converted to electrical energy.

While thermal efficiency was very high, greater than 55%, the mechanical efficiency fell short. Terry said these findings helped the team pinpoint sources of efficiency loss. “We knew that the linear alternator, though custom-built, was not optimized for our design. We also realized that friction was causing significant losses.”

This information will be useful for other designers. “The auto industry already has really good solutions for reducing friction and Peter and his team had already developed the conceptual design for much more efficient alternators,” said Terry. “So, we modeled design solutions, but chose not to focus particularly on these areas. Our goal was to thoroughly test and understand the prototype.”

In general, emissions from HCCI combustion are a mixed bag. Running on conventional fuels, HCCI generates extremely low nitrogen oxide (NOX) emissions but relatively high levels of hydrocarbon and carbon monoxide emissions. However, with hydrogen fuel, NOX emissions can be an issue—one that research has shown can be addressed through engineering.
In this area, however, the team’s data was inconclusive, Terry explained. “Unfortunately, we were unable to run the engine long enough to generate reliable emissions data. Again, with such a new design, you can’t always be sure what you will find. This is something we would like to study further, however.”

Part of the design process was to determine an optimal method for keeping the two pistons moving in synchronization, because any difference in timing between the pistons causes unwanted vibration. Most opposing piston designs use mechanical linkage to keep the pistons in sync. Aligned with the goal of simplicity, the CRF team explored another option: passive synchronization of the pistons via the electromagnetic force generated by linear alternators.

The team’s results showed that passive synchronization was achievable, but perhaps not reliable enough for a practical design. Commercial systems will likely need to use the linear alternators for active control of the piston synchronization.

Only a handful of modern free-piston engines have ever been built. The German government has funded the development of a single-piston engine, and Toyota R&D also has a demonstration engine that has run for several consecutive hours.

“By building and testing an opposing-piston design, Sandia has lent credibility to the concept, and our data is attracting worldwide attention,” said Terry. “Besides showing the potential for high efficiency, our design has pinpointed areas to focus on to obtain the high efficiencies that the free-piston engine can offer.”