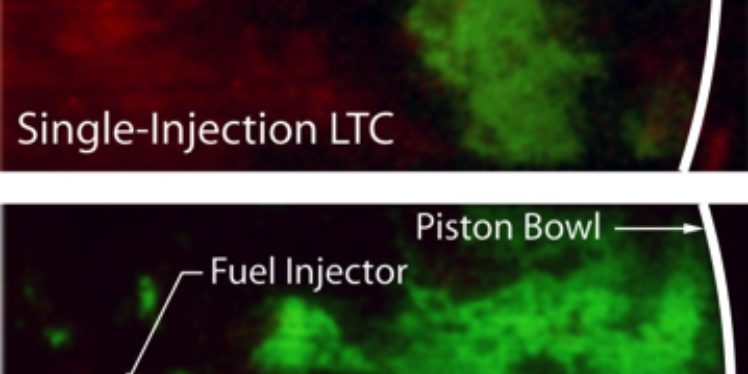 If you ask a long-haul trucker or a European car driver what pump they pull up to at the fuel station, the answer will most likely be “diesel.” These drivers choose diesel-fueled vehicles because diesel engines are more efficient than gasoline engines. When burning tens of thousands of gallons per year over long cross-country freight runs or when faced with high European fuel taxes, a more efficient engine is important. If fuel prices continue to rise, American car and light-truck drivers may also demand more fuel-efficient vehicles, which could mean a switch to more diesel engines in America.

While the diesel engine is more efficient, conventional diesel combustion creates air pollutants that are difficult to mitigate. One way to address the pollution problem is to alter combustion so that fewer pollutants are created in the first place. Low-temperature combustion (LTC) is a leading strategy designed to do just that, but engineers need more scientific details about LTC to develop new engines to take full advantage of this new approach. To meet this need, CRF researchers Mark Musculus, Paul Miles, Lyle Pickett, and David Cicone, working with numerous visiting scientists, have developed a new conceptual model that describes the chemical and physical processes occurring inside the engine under LTC conditions.

LTC is designed to reduce or eliminate the two most problematic pollutants emitted by diesel engines, particulate matter (PM) and nitrogen oxides (NOx). PM is composed of black soot particles, which are often soaked with unburned or partially burned fuel components. NOx emissions are toxic and combine with other pollutants in the atmosphere to create ground-level ozone, or smog.

From previous CRF optical engine work in the 1980s and 1990s, we understand how conventional diesel combustion creates PM and NOx. The left side of Figure 1 shows a conceptual model of conventional diesel combustion that was proposed in 1997, along with some of the images from various optical diagnostics that support the model. The model shows the temporal development of several important in-cylinder features: a high-pressure spray of liquid fuel forms a conical “jet” as it vaporizes and mixes with air into the cylinder; combustion in fuel-rich regions within the jet creates soot, which contributes to PM emissions; and a diffusion flame surrounds the fuel jet, and the high temperatures in the flame cause nitrogen and oxygen in the air to combine into NOx molecules. In LTC, some exhaust gases are recirculated back into the cylinder where they absorb combustion heat. This dilution effect lowers combustion temperatures, which reduces NOx formation. The other part of the strategy is to initiate the fuel spray earlier in the engine cycle, to give the fuel more time to mix with air before it burns. LTC thereby avoids both the high temperatures that lead to NOx formation and much of the fuel-rich regions that lead to PM.

While LTC helps to reduce PM and NOx pollution, it is not without its own problems. LTC minimizes NOx and PM, but other pollutants increase, including unburned hydrocarbons (UHCs), which are toxic and decrease fuel efficiency. Hence, researchers had to better understand how LTC progresses inside the engine cylinder and the source of the UHCs.

Using a suite of optical diagnostics, the CRF researchers acquired new optical data to develop the new conceptual model for LTC engines, which is shown on the right side of Figure 1. LTC starts much like conventional diesel combustion, with a high-pressure spray of liquid fuel that forms a conical “jet” as it vaporizes and mixes with air inside the engine. In LTC, however, the fuel does not begin to combust until after the end of fuel injection. With extra time before combustion, the fuel is better mixed with the air inside the cylinder, so that less soot and PM are formed. Also, instead of a thin, hot diffusion flame surrounding the jet and creating NOx, combustion is more evenly distributed and cooler, so that less NOx is formed.

The optical data also provided clues about the UHC source. Diesel fuel ignites in two stages, burning only partially in the first stage. Formaldehyde is formed by partial combustion during the first stage, and is indicative of UHCs. The hydroxyl radical (OH) is formed during the second stage, and is indicative of complete combustion and consumption of the UHCs. Laser-induced fluorescence of OH showed that fuel far away from the injector burned to completion, but laser-induced fluorescence of formaldehyde showed that fuel near the injector did not burn to completion. These near-injector regions were the source of the UHCs.

The next step was to understand why the fuel near the injector did not burn completely. This required the fuel concentration to be measured, but without combustion. To prevent combustion, the researchers ran the engine without any oxygen, using pure nitrogen gas (normal air is about 80% nitrogen and 20% oxygen). Toluene fuel-tracer and Rayleigh-scattering measurements showed that fuel concentrations in the region near the injector were too low, preventing the fuel from burning completely.

Armed with this understanding of UHC formation, CRF researchers Mark Musculus and Jacqueline O’Connor looked for a way to increase fuel concentration near the injector. One way is to add post-injections—smaller squirts of fuel after the main spray that add a bit more fuel in just the right spot and at the right time. The top image of Figure 2 shows the situation without a post injection, with OH (green) on the right side of the image indicating complete combustion, but formaldehyde (red) near the injector on the left side of the image, indicating incomplete combustion and UHCs. The bottom image of Figure 2 shows that with the post-injection, the green zone of complete combustion extends over a larger region. This in turn leads to lower UHC emissions while also increasing efficiency by ensuring that less fuel is wasted. Figure 2: Images of combustion from inside a diesel engine showing laser-induced fluorescence of formaldehyde (red) and hydroxyl (green) for either a single fuel injection (top) or with post injections (bottom). The images are partial views through the piston, with the injector on the left and the bowl of the piston on the right.

Details of the new conceptual model shown on the right side in Figure 1 have been published in a review article in the journal Progress in Energy and Combustion Science (“Conceptual models for partially premixed low-temperature diesel combustion,” Vol. 39, p. 246–283, 2013). Both the older conceptual model for conventional diesel combustion and the new one for LTC are valuable to engine designers because they provide the science base necessary to build the next generation of cleaner, more fuel-efficient engines to power transportation in our nation.