Hanging out with the stars 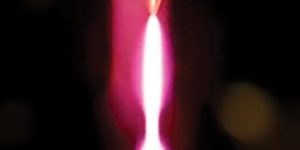 Low-temperature plasma—the most pervasive state of matter in the universe—consists of gaseous mixtures of ions and electrons that interact with background neutral atoms or molecules to make them reactive. It also generates energetic photons. All this activity means there’s no shortage of plasma uses to study. On a small scale, they decontaminate surfaces, decompose materials, and strengthen a wide range of industrial catalytic reactions; medically, they offer new tools to cut and heal tissues; and plasma makes metal-arc welding possible. But Sandia Labs researchers think big: Consider that the ionosphere wrapping the Earth is a plasma that carries large electric currents in the polar regions. And low-pressure, collisionless plasmas that generate little heat are of interest to astrophysicists studying plasmas hanging out between stars.

And now researchers worldwide have a new collaborative plasma research facility to study these low-temperature plasmas. The 5-year, $5.5 million project, called the Sandia Low Temperature Plasma Research Facility(PRF), is sponsored by DOE’s Office of Science. Participants are selected biannually through a proposal process supported by Sandia and the Princeton Plasma Physics Laboratory, where a similar collaborative facility is being established by the same agency.
As a collaborative research facility, the PRF is customer-oriented. Sandia not only interfaces with potential collaborators and helps them find the right tools and people, but also supports visiting scientists to set up their systems in our laboratories and utilize our capabilities to help answer their questions. Several Sandia Combustion Research Facility PIs also support the PRF, including Jonathan Frank, Chris Kliewer and Nils Hansen, all of whom have extensive experience developing and applying laser diagnostics and mass spectrometry to explain the physics and chemistry occurring in reacting flows.

We are making Sandia’s one-of-a-kind diagnostic tools available to the larger community, and our experts provide critical insights regarding characteristics of electrical breakdown and plasmas. We have images resolved in picoseconds — trillionths of a second — that detect and display electrical fields prior to and during electrical discharge events.

Full version published originally as “Images in a trillionth of a second,” Sandia Lab News, January 2020.