on May 21, 2015 By Tara In Blog Comments Off on Jackie Chen Introduces Nation’s Top Science Students to Computational Combustion Challenges 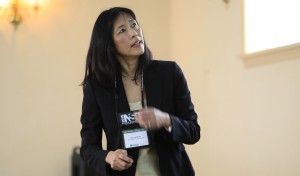 Jackie Chen helps top science students from across the country understand the complexities and importance of using powerful computers to simulate the thousands of processes underlying engine combustion. (Photo by Dennis Brack, U.S. Department of Energy, Office of Science)

On May 2, the Combustion Research Facility’s Jackie Chen was a featured Science Day speaker during the 2015 Department of Energy (DOE) National Science Bowl.

The National Science Bowl is a nationwide academic competition that tests students’ knowledge in all areas of science and mathematics. Regional winners are invited by DOE to attend the national event, where they compete against other top teams of middle and high school students.

To help celebrate the competition’s 25th year, Science Day focused on a “Then and Now” theme to trace the evolution and role of high-performance computing in science. Jackie’s talk, “Taming fire through simulation,” discussed the need for increasingly powerful computers to create the science foundation for tomorrow’s clean and efficient combustion processes.

As Jackie explained to her audience, “The basic equations governing flow and chemistry have been known for over a century. However, the ability to solve them—really solve them, in practical regimes and with chemical realism—is relatively new.”

Using sophisticated scientific evidence and examples, artfully illustrated with photos and simulations of combustion, Jackie described how computational combustion is leveraging advances in high-performance computing to create a new understanding of the combustors in today’s engines and turbines. She also discussed the partnerships between combustion and computer scientists, applied mathematicians, and high-performance computing vendors for such large-scale computations.

As the director of the Center for Exascale Simulation of Combustion in Turbulence (ExaCT), which is a Co-Design Center sponsored by the DOE Office of Science’s Advanced Scientific Computing Research program, Jackie is highly familiar with such collaborations. Co-design, or the process of designing computer systems to meet specific science-problem requirements, requires the combined expertise of high-performance computing vendors, hardware architects, software developers, domain scientists, computer scientists, and applied mathematicians to make informed decisions about features and tradeoffs to pursue in designing computer hardware, software, and algorithms.

Jackie was pleased to note that her talk was well received by the high school students. “Several of the students came up afterwards and asked questions. The entire day was enlightening, inspiring, and fun for the presenters and the students.”