You are here:
Visiting the CRF 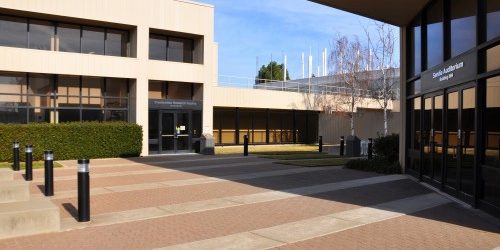 Transportation Energy Center Director, Bob Carling, conducted the CRF portion of the Leadership Livermore Annual Tour. Leadership Livermore is a program created by the Livermore Chamber of Commerce in partnership with the City of Livermore to bring different individuals and organizations together to get a “behind the scenes” look at the community. The group that toured the CRF included representatives from the local government, law enforcement, education, healthcare and private industry.

Bob Carling also hosted a large group of student visitors from the Korea Advanced Institute of Science and Technology (KAIST) University today. The students were given an overview of the research that goes on at the CRF as well as a tour of the laboratories.

Senior manager of the Livermore Valley Open Campus, Andy McIlroy, participated in a panel entitled  ‘Next Generation Transportation Fuels and Technologies’ at the VerdeXchange Green Marketmaker’s Conference. The VerdeXchange Market Makers Conference is an international, executive-level conference that brings together leaders from different sectors of the green economy.

The Director of Transportation Energy Center, Bob Carling, hosted a CRF Advisory Committee meeting. The event, which lasted 2 days, featured research presentations as well as focused discussions on the future of transportation and combustion, new avenues of research and partnership models, and R&D challenges. CRF researchers and managers participated in the meeting; board members included individuals from the national laboratories, the automotive industry, and academia.

Students and Professors Spend the Summer at Sandia under DOE’s WDTS Program
August 20, 2014