You are here: Home » Blog » KinBot: a Tool to Accelerate Chemical Descriptions of Combustion

KinBot: a Tool to Accelerate Chemical Descriptions of Combustion

on May 1, 2015 By Tara In Blog, Combustion Chemistry, Engine Combustion Comments Off on KinBot: a Tool to Accelerate Chemical Descriptions of Combustion 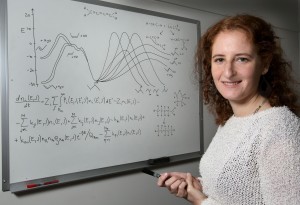 Judit Zádor’s KinBot code looks for 3D structures in chemical reactions to automatically make predictions about behavior of potential reactions in combustion for a given molecule. With these predictions, scientists can identify the rates at which relevant reactions take place, information that is critical to understanding combustion. (Photo by Dino Vournas)

Faced with the time-consuming and tedious task of characterizing the myriad reactions in a combustion process at the molecular level, Judit Zádor turned to computers—an understandable choice, given her role as a computational physical chemist at the CRF. Her solution, a code called KinBot, has demonstrated that it can predict a given molecule’s behavior in myriad potential combustion reactions. The key is KinBot’s ability to identify viable 3D structures for critical intermediate species on the pathway between reactants and products.

With KinBot, combustion scientists can more rapidly predict the reaction speed, expressed as rate coefficients. This knowledge brings the community closer to understanding and predicting the combustion process using either conventional fuels or new fuels that can reduce pollutants, greenhouse gas emissions, and dependence on petroleum.

A puzzle with too many pieces

Identifying the rates at which relevant reactions take place is a challenge for scientists who seek to understand combustion. A fundamental problem is the sheer number of reactions—possibly in the thousands—involved in combustion of even a single-component fuel. Typical fuels may comprise hundreds of chemical components, so even managing the pieces of the puzzle is difficult.

Chemists have developed software to keep a running list of potential reactions during combustion. But today’s software is a partial solution. Judit says, “We also need to calculate the parameters that characterize these reactions. We need to know the branching to create each molecule in a reaction and the corresponding rate coefficients. To calculate these properties, we need to know the 3D structure of the intermediates for the reaction in question.”

A molecule’s atomic connections and spatial arrangements determine its key properties, such as energy and vibrational frequencies. These properties govern the rate at which molecules turn into one another. For instance, the greater the energy of a transition state connecting two stable intermediates, the slower the transformation of one intermediate into the other.

Teasing out this information for a single reaction can take months because a single reaction often has many pathways associated with several structures. Judit uses Legos to explain. “Starting with just a few blocks, you can make a surprisingly large number of arrangements, and it is daunting to try to make all possible configurations. A molecule can stretch out, curl up, or take many forms between these extremes; this ensemble of shapes determines the molecule’s reactivity on a macroscopic level. Many times we have to deal with dozens of shapes—we call them conformers—for each chemical species involved. It’s a lot of work!” 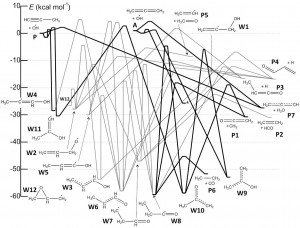 Applying rules that replicate human intuition, KinBot explored these structures and their connections for the OH + allene and OH + propyne reactions.

Despite their advantages—speed, absence of errors, and incapacity for boredom—computers lack the intuition possessed by human chemists. Without intuition, even computers cannot characterize combustion reactions in a reasonable amount of computation time.

Working with Habib Najm and supported by an Early Career Laboratory-Directed Research and Development grant, Judit generated a series of generic, minimalist rules that crystalize a century of knowledge. Validated by experiments and theory, these rules enable computers to proceed like a chemist.

Judit explains, “KinBot first analyzes a structure and makes conclusions just as a human would: this is a radical structure or this is a cyclic structure, for instance. Then KinBot applies rules to break and make bonds and morphs the structures into shapes that are very close to the critical transition states for these processes.” The resulting geometries are sent to an electronic-structure code for refinement.

KinBot repeats the process for all possible pathways and configurations in a reaction. Some pathways can be dismissed because they require too much energy. But, says Judit, “You have to know all the pathways to identify the lowest-energy pathway. So it’s helpful to have a code that rapidly scans and proposes a large number of possibilities.” These options are then screened by KinBot’s rules to keep the number of proposed structures within the bounds of practicality.

The unexpected virtue of inexperience

Given the realities of time and funding, researchers often limit their searches to the pathways shown to be probable by their experience and experimental knowledge. Moreover, because chemists typically focus on a single molecule or molecule type, they may develop tunnel vision and overlook (or never hear about) reactions found in another molecule.

In contrast, KinBot’s rules are assembled from the work of many researchers, demonstrating the virtue of inexperience. “KinBot might find that rules for carbonate also apply to ether-type molecules and uncover pathways that would otherwise be overlooked,” says Judit. KinBot may stumble upon exotic structures (e.g., a high-energy but stable structure with an unusual trivalent oxygen atom), put new twists on known reaction steps, or simply combine simple steps in an unexpected way.

KinBot’s rules imperfectly reflect reality; however, Judit is unfazed by this gap. “When I see a result that doesn’t fit the rules, I know that I need to think about that result more.” A recent example is KinBot’s discovery of a water-elimination pathway in alcohol combustion. Solving the problem underlying this pathway required sophisticated electronic-structure calculations; the results were later presented in a high-profile publication.

“Chemists like working on tough problems. We’re happy to let KinBot handle the routine work, so we have time to concentrate on the problems that require creative thinking,” says Judit.

KinBot is off to a strong start. It has been tested by Oliver Welz, a former CRF postdoc who now heads a chemical kinetics research group at the University of Duisburg-Essen in Germany, and a paper on KinBot garnered Judit the Distinguished Paper award in Reaction Kinetics at the 35th International Symposium on Combustion last summer.
This summer, Ruben van de Vijver will use KinBot to find missing parameters for chemical mechanisms developed at Belgium’s Ghent University. The results will help Judit improve KinBot’s code to encompass more molecules.

Xiaohu Li, a CRF postdoc working with Judit, has proposed extending KinBot’s capabilities by incorporating molecular-dynamics simulations. Although these calculations are significantly more time-consuming than the present approach, they require far fewer assumptions. “We hope that if we combine the current rule-based strategy with molecular dynamics in a clever way, we are going to be ahead of the game. But this is yet to be seen.”