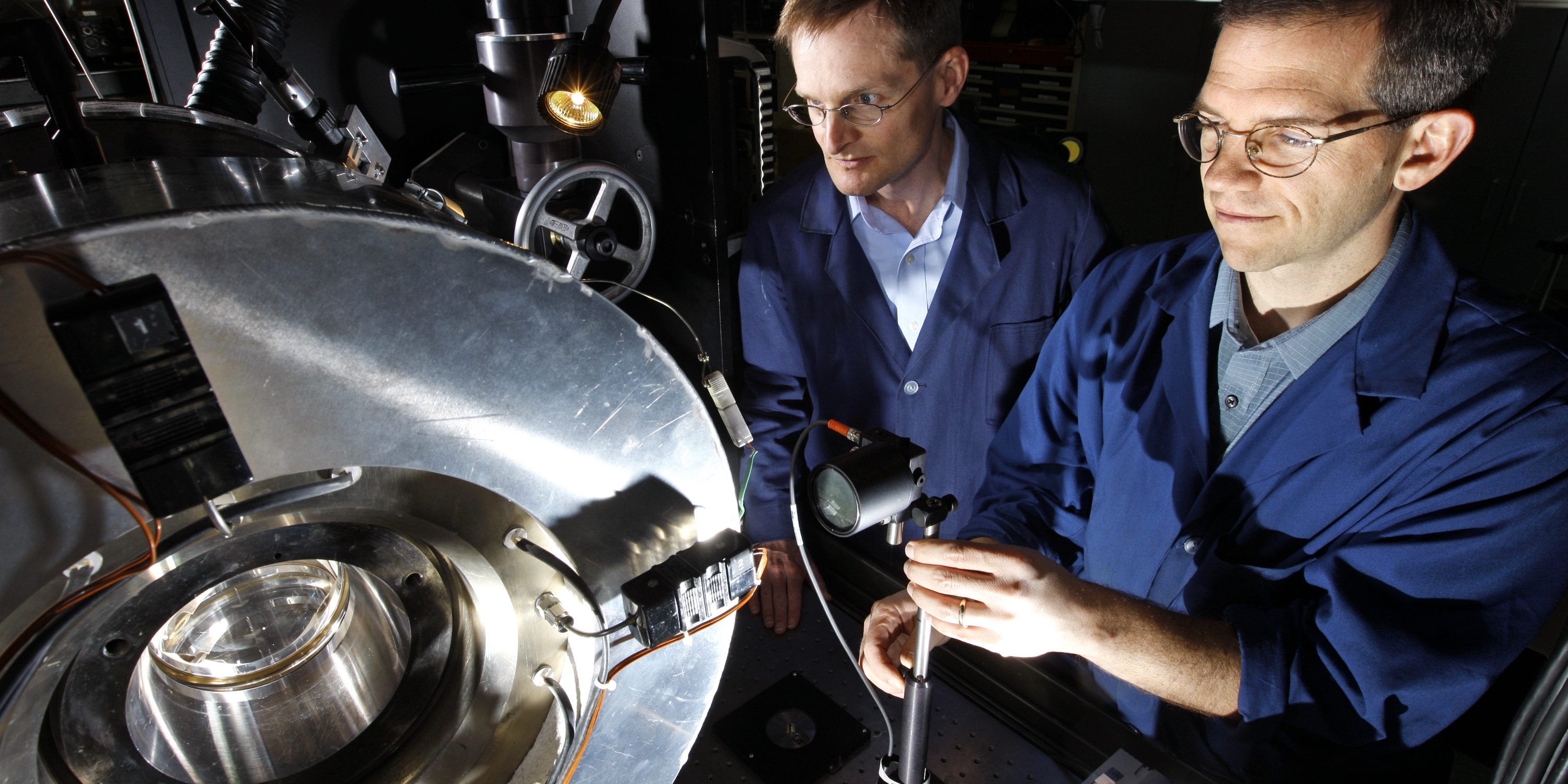 Pickett and Mueller are working on a project that could overcome the practical limitations of the Leaner Lifted-Flame Combustion strategy. Experiments will be conducted in Pickett’s constant-volume combustion vessel (shown) and Mueller’s optical engine. LLFC and biofuels could enable a highly efficient, cost-effective, low-emission engine. Photo courtesy of Randy Wong

When Aristotle said that the whole is greater than the sum of its parts, he probably wasn’t thinking of engines and biofuels. But his famous quote applies perfectly to the synergy between Leaner Lifted-Flame Combustion (LLFC) and oxygenated biofuels. Each technology has its own limitations, but combining the two may create something much greater – a cleaner, more efficient, lower cost diesel engine that runs on domestic, renewable fuels.

“The cost of advanced engine and aftertreatment technologies can be a barrier to improving fuel economy,” says Pickett. “Clean-diesel cars are more fuel efficient than regular gasoline cars but they haven’t been adopted widely, in part because they are more expensive. The interplay between LLFC and the right biofuel may produce a high-efficiency combustion strategy that can also reduce costly aftertreatment and overcome that barrier.”

LLFC is an alternative combustion strategy developed by Sandia with the potential for soot-free emissions. With LLFC, the fuel spray mixes with air inside the cylinder before reaching the flame. The distance from the fuel injector to the flame is the “lift-off length.”

“With enough oxygen mixed into the fuel, you go from an orange, soot-producing flame to a blue flame that burns cleanly,” explains Pickett. Other methods to reduce emissions in diesel engines are being pursued, but they are difficult to control because fuel injection occurs long before combustion is initiated. LLFC offers a control advantage because fuel injection occurs simultaneously with combustion.

LLFC has been demonstrated in lab tests; however, the conditions are hard to reproduce in an engine using typical diesel fuel. The system needs low ambient temperature, something hard to sustain in an engine, and small nozzle holes to increase air entrainment, which may be incompatible with engine power requirements. An oxygen-rich fuel could overcome these difficulties.

“Every strategy has its tradeoffs. For example, LLFC with conventional diesel fuel may require high injection pressure, which can be costly,” says Mueller. “But using an oxygenated fuel could reduce that need.” Pickett holds what could be the key to moving Leaner Lifted-Flame Combustion (LLFC) from the lab to the road—an oxygenated biofuel designed to capitalize on the engine’s efficiency. The constant-volume combustion vessel is shown in the background. Photo courtesy of Randy Wong

Since many biofuels are oxygenates, they should naturally enable LLFC. In addition, renewable biofuels should have lower greenhouse gas emissions over their life-cycles and would count towards the federal Renewable Fuel Standard. The potential synergy between an advanced combustion strategy and a renewable fuel is one of the main attractions of this project.

To meet current emission standards, modern diesel engines use a particulate filter. The black soot that in the past could be observed coming from the tailpipe of a bus or 18-wheeler is now trapped on the filter. The filter is periodically heated to consume the soot, but this requires more fuel, resulting in lower overall efficiency and fewer miles per gallon. LLFC may allow a diesel engine to meet emissions standards without the use of a particulate filter, thus avoiding this penalty.

“Even though biofuels have less energy per volume than regular diesel, if you can eliminate the particulate filter, overall efficiency improves, somewhat offsetting its lower energy content,” says Pickett. In addition, removing the particulate filter would reduce the pumping work of the engine as well as the weight and cost of the vehicle. In fact, aftertreatment can cost as much as the powertrain for some engines.