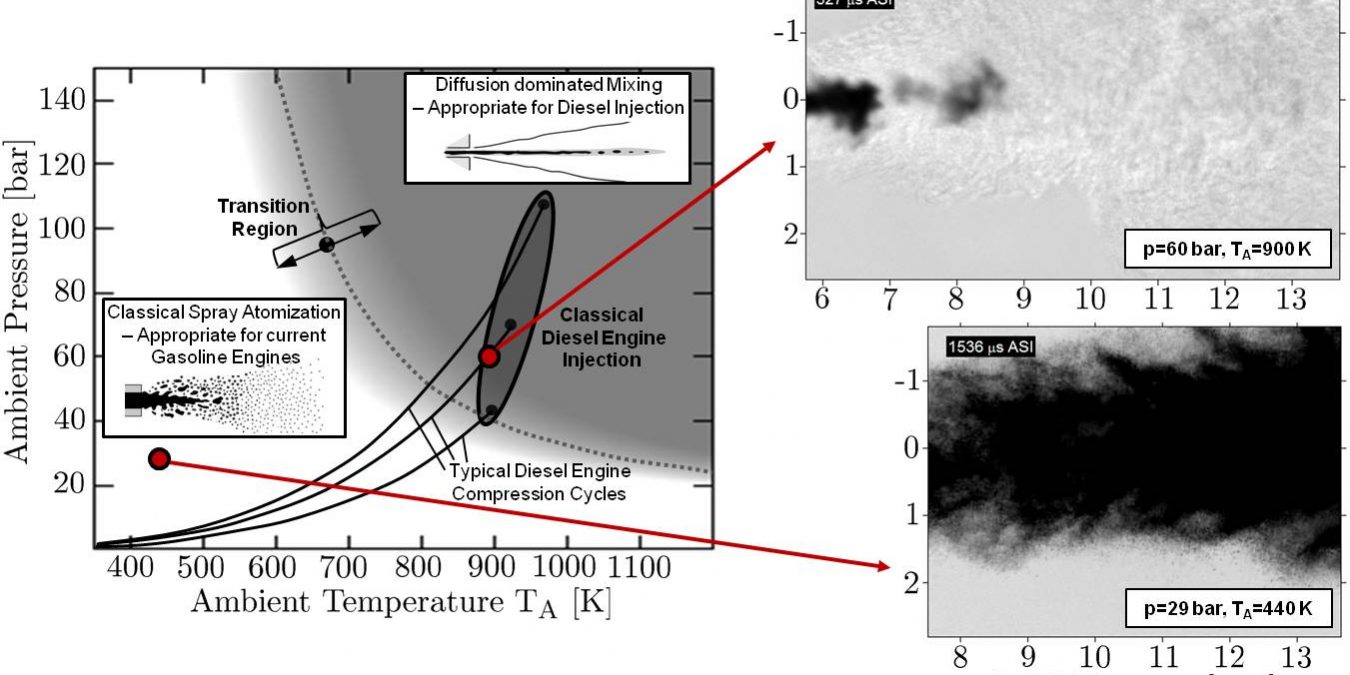 By combining advanced theory and high-fidelity large eddy simulation, CRF researchers Rainer Dahms and Joe Oefelein have provided new conceptual insights that promise to improve the understanding and prediction of fuel-injection processes at high-pressure diesel engine conditions. Their results, which were corroborated by experiments performed by CRF researchers Lyle Pickett and Julien Manin, have demonstrated that under certain high-pressure conditions the distinct interface between the injected liquid and ambient gas vanishes. As a consequence, the injected fuel evolves without droplet formation or evaporation, raising questions about the validity of widely applied spray atomization models for such high-pressure conditions.

Optical imaging from a variety of experiments, mainly performed in the context of liquid-fuel rocket propulsion, has long shown that under some high-pressure conditions discrete two-phase flow processes can become weaker. Instead, a diffusion-dominated mixing layer without surface-tension forces replaces the classical gas-liquid interface. As shown in Figure 1, this mixing layer is conceptually very different from the classic concept of the gas-liquid interface.

Because no science-based model is available to explain and quantify the operating pressures under which the transition from classical sprays to dense-fluid jets occurs, the transition has been poorly understood. The basic theory for a pure fluid—which dictates that surface-tension forces diminish once the operating pressure exceeds the critical pressure—does not generally hold true for multiple-component mixtures. Therefore, information to enable understanding and prediction of these transitional processes carries important implications for designing and developing predictive combustion and emission models.

To gain more insights into fuel-injection processes at high-pressure diesel engine conditions, the CRF team focused on the “Spray A” reference case, a relevant diesel engine condition defined by the Engine Combustion Network initiative maintained by Sandia National Laboratories. In the Spray A case, n-dodecane is injected as a liquid at a temperature of 363 K into nitrogen at a temperature of 900 K and a chamber pressure of 60 bar. The team compared this case to an experiment with the same fuel-injection temperature, but with a nitrogen temperature of 440 K and a lower chamber pressure of 29 bar. These conditions preserve the ambient density of the Spray A case, while maintaining jet penetration and gas-liquid interaction forces similar to those in Spray A.

The model used for this comparison is based on a theoretical-numerical framework that provides a generalized treatment of the thermodynamics and transport processes of hydrocarbon mixtures over a wide pressure and temperature condition range. The CRF team employed an advanced equation of state based on the well-established “extended corresponding states” model to evaluate the pressure-volume-temperature behavior of the inherently dense multiple-component fluid mixture. This method has been shown by others to provide accurate results, especially at saturated conditions.

Combined with gradient theory—established by van der Waals in 1893 and reformulated in 1958 by Cahn and Hilliard to compute the physical and continuous variation of fluid properties across a thin molecular vapor-liquid interface—the model allowed the researchers to reconstruct the gas-liquid molecular structure, which in turn enabled them to calculate the surface tension, interfacial density profiles, and gas-liquid interface thickness. Various researchers have confirmed this approximation’s validity over time using statistical analysis of molecular dynamic simulations of vapor-liquid interface profiles. Figure 2 shows the calculated results for the two investigated cases defined above.

Figure 2. Interface state density profiles and thicknesses (L) for (left) the lower-pressure diesel engine condition and (right) the Spray A condition, as calculated by gradient theory [1,2]. Corresponding mean free pathways (λ) are shown for reference. Interestingly, the Knudsen-number criterion (Kn = λ/L) indicates that the Spray A interface falls within the fluid-mechanic continuum regime (Kn < 1), whereas the lower-pressure interface exhibits a classical molecular interface.

Notably, the interface is distinctively thicker at the Spray A condition than at the lower-pressure condition. The relevance of this thickness is highlighted by comparing it to the molecular mean free path, also shown in Figure 2. Fluid particles equilibrate over distances comparable to this mean free path. Because this length scale at the lower-pressure interface is larger than the interface thickness, the interfacial processes at the lower pressure are governed by molecular dynamics, and the vapor temperature equilibrates with the liquid temperature. This interface exhibits surface-tension forces, and is therefore expected to lead to the classical spray phenomena governed by two-phase theory.

The situation for the Spray A interface, however, is reversed. The mean free path has become more than an order of magnitude shorter than the interface thickness. This interface enters the continuum-length-scale regime where transport processes, rather than intermolecular forces, dominate. Surface-tension forces diminish as this interface thickness increases substantially.

with λ as the mean free path and L as the interface thickness. This criterion allows the classification of liquid injection processes as a classical spray or dense-fluid jet over a wide range of diesel-engine fuel injection conditions. Therefore, it is now possible to construct regime diagrams, such as shown in Figure 3, that quantify the conditions under which the transition from classical spray to dense-fluid jet occurs. The regime diagram suggests that, contrary to conventional wisdom, classical spray phenomena do not occur at typical diesel-engine injection conditions. Instead, the fuel is injected as a dense-fluid jet with diminished surface-tension forces leading to diffusion-dominated mixing dynamics. This new conceptual insight should prove important to refining predictive combustion and emissions models, which could ultimately be used to design cleaner and more efficient diesel engines.