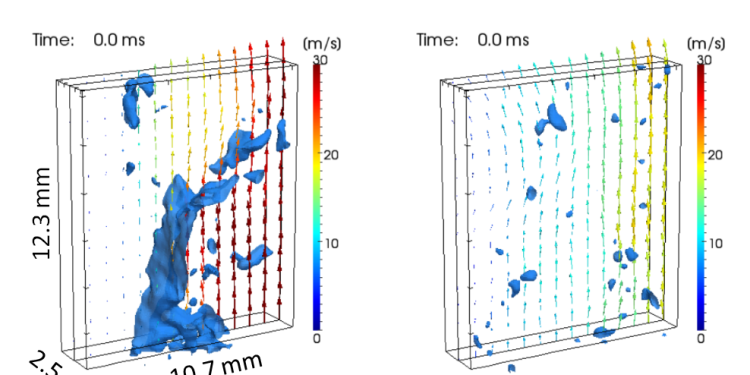 The Advanced Imaging Laboratory has developed the capability for multi-kHz volumetric velocity-field measurements in flames. This capability is particularly valuable for studying fluid-dynamic strain field evolution, which plays a central role in turbulence–flame interactions. Jonathan Frank and Bruno Coriton, in collaboration with CRF visitor Adam Steinberg of the University of Toronto, recently demonstrated high-repetition-rate tomographic particle image velocimetry (TPIV) feasibility for measuring the dynamics of flow-flame interactions in lifted and burner-stabilized jet flames.

The TPIV technique provides volumetric, three-component velocity-field measurements and enables access to the complete velocity-gradient tensor, which serves as the basis for determining key fluid-dynamic quantities, such as the divergence, vorticity, principal strain-rate components, and tensor invariants. (In contrast, 2-D PIV techniques provide incomplete or biased measurements of these quantities in the presence of 3-D flow structures.) Volumetric three-component velocity data are critical for the proper interpretation and analysis of high-speed imaging measurements in turbulent flows because 3-D motion can complicate temporal data-sequence interpretation. However, high-speed TPIV measurements in turbulent flames are complicated by several factors: significant variations in particle-seeding density, imaging noise, beam steering from the index-of-refraction gradients, and the requirements for high framing rates.

Each camera captures each laser pulse’s particle scattering on a single frame. The fields of view from the different cameras are carefully registered using a reference target, and a tomographic reconstruction of the 3-D particle field is performed using a multiplicative algebraic reconstruction tomography (MART) algorithm. Interframe particle displacements are determined by performing multiple-pass cross-correlation analysis using a final interrogation region size of 24 × 24 × 24 voxels (360 × 360 × 360 µm3), yielding more than 900,000 vectors in the probe volume for 10-kHz measurements. Figure 1b shows a single-shot velocity-field measurement at the base of a lifted dimethyl-ether (DME) jet flame.

Figure 1. (a) Experimental configuration for simultaneous high-repetition-rate TPIV and OH-LIF imaging measurements for studying turbulent-flame dynamics. (b) Single-shot three-dimensional velocity vector field from a TPIV measurement in the stabilization region of a lifted jet flame. Velocity vectors are color-coded according to their magnitudes. For the sake of clarity, 1 out of 64 vectors is displayed. The main jet flow is on the right-hand side, and the lifted flame is stabilized toward the upper left of the probe volume.

A comparison of 10-kHz TPIV measurements in a turbulent jet flame and a nonreacting air jet reveals the effects of heat release on the structure of the strain-rate field, as shown in Figure 2. In the flame, the isosurfaces of the strain rate norm, |s|, form elongated structures that are concentrated in the shear layer and span a large portion of the probe volume. In contrast, the air jet has smaller structures distributed over a broader region of the jet flow. In both cases, these high strain-rate regions are temporally intermittent, as seen in the movie sequences. Figure 2. Temporal evolution of velocity and strain-rate fields in turbulent-jet flame and nonreacting air jet from 10-kHz TPIV measurements. Blue surfaces are isosurfaces of the strain rate norm |s| = 8 x 103 s–1. Velocity vectors are shown only in the midplane (1 out of 16 in-plane vectors displayed).

In the flame, the bursts of high strain-rate regions can lead to localized extinction. The measurement sequence in Figure 3 shows the temporal evolution of the velocity, compressive principal strain rate, and OH-LIF fields during a localized extinction event. The velocity and OH-LIF signal are displayed in the central plane, and the compressive strain rate, Γ0, is represented by blue isosurfaces at Γ0 = –15 × 103 s–1. The onset of extinction occurs at time t = 0.20 ms and is identified by the formation of a discontinuity in the contour of the OH-LIF signal. Figure 3. Temporal evolution of velocity and strain-rate fields during a localized extinction event in a turbulent partially premixed DME/air jet flame from simultaneous TPIV and OH-LIF imaging measurements at 10 kHz. Blue surfaces are isosurfaces of the compressive strain rate for Гo = –15 x 103 s–1. Velocity vectors are shown in the same plane as the OH-LIF images (1 out of 16 in-plane vectors displayed).

The image sequence shows large coherent structures with high compressive strain rates in the localized extinction region. These structures remain coherent and closely coupled to the reaction zone until extinction occurs. As the flame approaches extinction, the high-temperature reaction zone becomes thinner. Once the flame is locally quenched, the strain rate decreases, and the large coherent structures break apart. The residence time of the extinguished region within the probe volume is ~0.5 ms, which is too short to capture a subsequent reignition.