Scientists increasingly turn to detailed chemical kinetic models—lists of all possible chemical reactions between the often thousands of chemical species appearing in flames and engines—to understand combustion’s complex chemistry. However, of the thousands of parameters required for these models, such as Arrhenius parameters for each reaction and thermochemistry and transport parameters for each species, very few have been directly measured. Extrapolation using empirical trends has led to reliable estimates for some of the missing data, and a few key parameters have been empirically tuned to fit bulk combustion targets. Nonetheless, many gaps remain.

To address this challenge, CRF scientists Ahren Jasper and Eugene Kamarchik teamed with James Miller and Stephen Klippenstein of Argonne National Laboratory to develop a new first-principles method for predicting collision integrals, fundamental quantities that underlie models of many bulk transport properties.1 First-principles theory relies only on calculated or well-known information and does not use empirically adjusted or measured information.

Of the three categories of data identified above, transport properties are perhaps the least well characterized. These bulk properties––diffusion, viscosity, and thermal conductivity––depend sensitively on the intermolecular forces between molecular species (see Figure 1). To quantify the relationships between these forces and the properties, theorists use “collision integrals,” denoted by Ω(l,s), that describe the changes in velocity and direction that molecules experience upon colliding. These integrals are highly averaged functions of the detailed intermolecular forces.

The collision integrals used in chemical modeling are almost always approximated using a simple isotropic Lennard–Jones model for the interaction potential. This model includes several severe approximations: it neglects the colliding species’ internal degrees of freedom, overlooks the orientation-dependence (anisotropy) of the detailed interaction potential, and treats the interaction’s repulsive wall as having an unphysical R12 dependence. 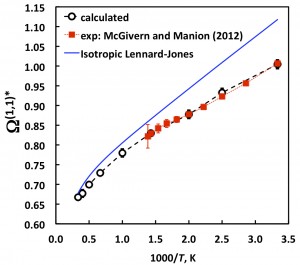 Figure 2. The calculated (1,1) collision integral for ethane + N2 is in quantitative agreement with the measured values of McGivern and Manion (Combust. Flame, 159, 3021, 2012). The simple Lennard–Jones model is in fair agreement at high temperatures, with larger errors at low temperatures.

The new theoretical method, and a family of approximations developed as part of this work, have been used to calculate transport properties for hundreds of previously uncharacterized species. Significantly, in addition to providing accurate transport properties for combustion modeling, the new theoretical approach can aid in analyzing the physics of diffusion. For example, the team found that diffusion was very sensitive to the treatment of the repulsive part of the intermolecular potential, particularly for weakly interacting systems like H + N2. They also noted that for larger systems, such as butane + N2, anisotropy in the intermolecular potential played a larger role in governing diffusion than had been previously observed.