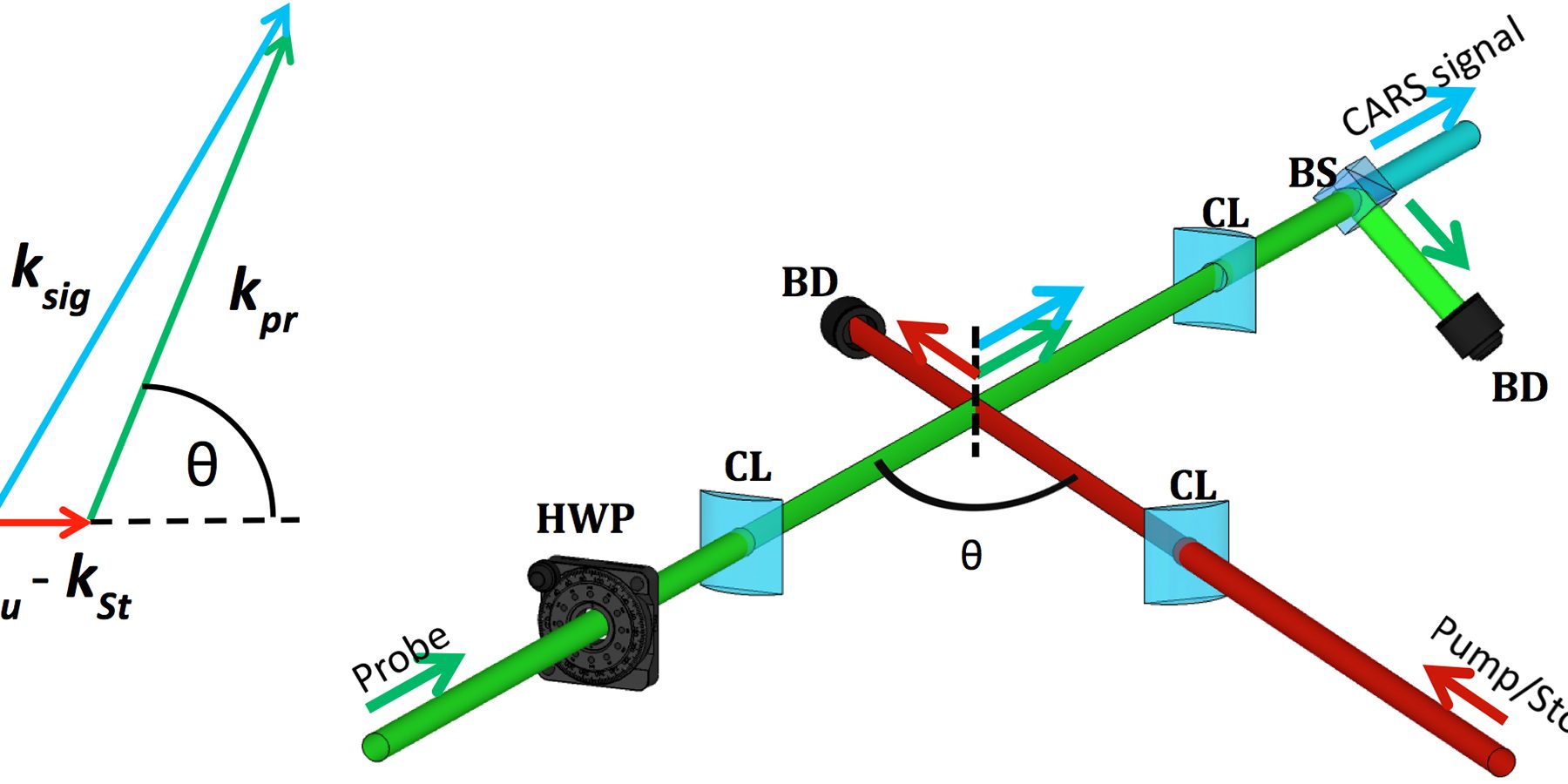 Coherent anti-Stokes Raman spectroscopy (CARS)—one of the most powerful gas-phase spectroscopic techniques—has been widely used and refined over the last 40 years in many fields of chemical physics, from chemical sensing and standoff detection of biowarfare agents to measuring molecular dynamics.

CARS has also been applied to numerous combustion research tasks, such as detecting both chemical species concentrations and gas-phase temperature. Specifically, CARS is used to measure the Boltzmann distribution of populated molecular rotational and vibrational states within a single laser shot.

However, CARS presents some technical challenges. To generate a signal with CARS, for example, researchers must ensure overlap of three separate laser beams in both space and time at the given probed volume. In turbulent environments, temperature swings can cause rapid fluctuations in the index of refraction, which in turn can temporarily steer laser beams away from each other—a phenomenon that can result in frequent loss of the CARS signal. Using the extremely efficient technique of driving Raman coherences with femtosecond (fs) pulses adds further experimental complexity, as researchers overlap micrometer-long pulses in time.

To help overcome these issues, CRF researchers Alexis Bohlin, Brian Patterson, and Christopher Kliewer discovered a simplified phase-matching scheme that enables a strong CARS signal with only two overlapping laser beams.1 This scheme involves crossing one broadband-frequency beam and one narrowband-frequency beam at the probe volume at an arbitrary angle. Because this scheme takes both the pump and Stokes CARS photons from the same laser pulse, the photons are automatically overlapped in space and time, resulting in a strong CARS signal that propagates collinearly with the probe. Polarization techniques are used to separate the signal beam from the probe beam. Figure 1 displays both the phase-matching scheme employed and an experimental arrangement around the probed volume.

In addition to greatly simplifying CARS experiments, the new phase-matching scheme opens up interesting new directions for CARS probing of combustion. In the conventional CARS phase-matching scheme, the crossing angles of the beams are calculated to conserve the energy and momentum of the photons in the mixing process. As a result, beams are typically crossed at very low angle. This yields signals averaged over a couple of millimeters in space—a length scale that does not provide sufficiently high resolution in some combustion environments. In contrast, the new two-beam CARS scheme allows for quick tuning of the spatial resolution by simply adjusting the crossing angle of the two beams. In addition, because the pump and Stokes photons are automatically overlapped spatially, the technique is far more robust against turbulent beam-steering effects, which increases its suitability for a diverse range of combustion conditions.

Figure 2. (a) Single-laser-shot two-beam 1-D rotational CARS signal on the CCD taken in a jet burner impinging on a steel wall running a premixed lean methane flame (Φ=0.8). (b) Fitted spectrum taken from a single pixel-row slice out of the image in a post-flame-front region of the flame. (c) Fitted spectrum taken in a pre-flame-front portion of the flame.

When used to probe the flame-wall interaction of a turbulent impinging jet burner, the two-beam CARS technique showed remarkable resilience to signal drop-outs. In this experiment—conducted in collaboration with Andreas Dreizler and CRF visiting student Markus Mann of Darmstadt University of Technology, Germany—data were collected in a one-dimensional CARS measurement along a line perpendicular to the surface upon which the impinging jet flame collided. Figure 2 displays a one-dimensional CARS measurement taken in a single laser shot. These results suggest the new scheme may allow probing of turbulent combustion with higher spatial resolution and robustness.

The two-beam CARS technique may also open the door to other multiplexed spectroscopic measurements. For instance, if the probe beam frequency is resonant with the electronic transition of any minor species in the flame, such as NO,2 simultaneous thermometry and minor species concentration measurements might be possible.

Perhaps most significantly, this newly developed two-beam CARS technique may enable CARS measurements in multiple spatial dimensions within a single laser shot. Current research at the CRF’s ultrafast diagnostics laboratory has demonstrated the first-ever two-dimensional CARS measurements in experiments that crossed a focused pump/Stokes beam (Figure 1) with an unfocused probe beam to generate a two-dimensional CARS signal. Such a capability will greatly enhance the ability to compare CARS measurements with the numerical simulation of combustion at a more detailed level for model validation and development.