You are here:
BlogHydrogenPartnershipsWorking with the CRF 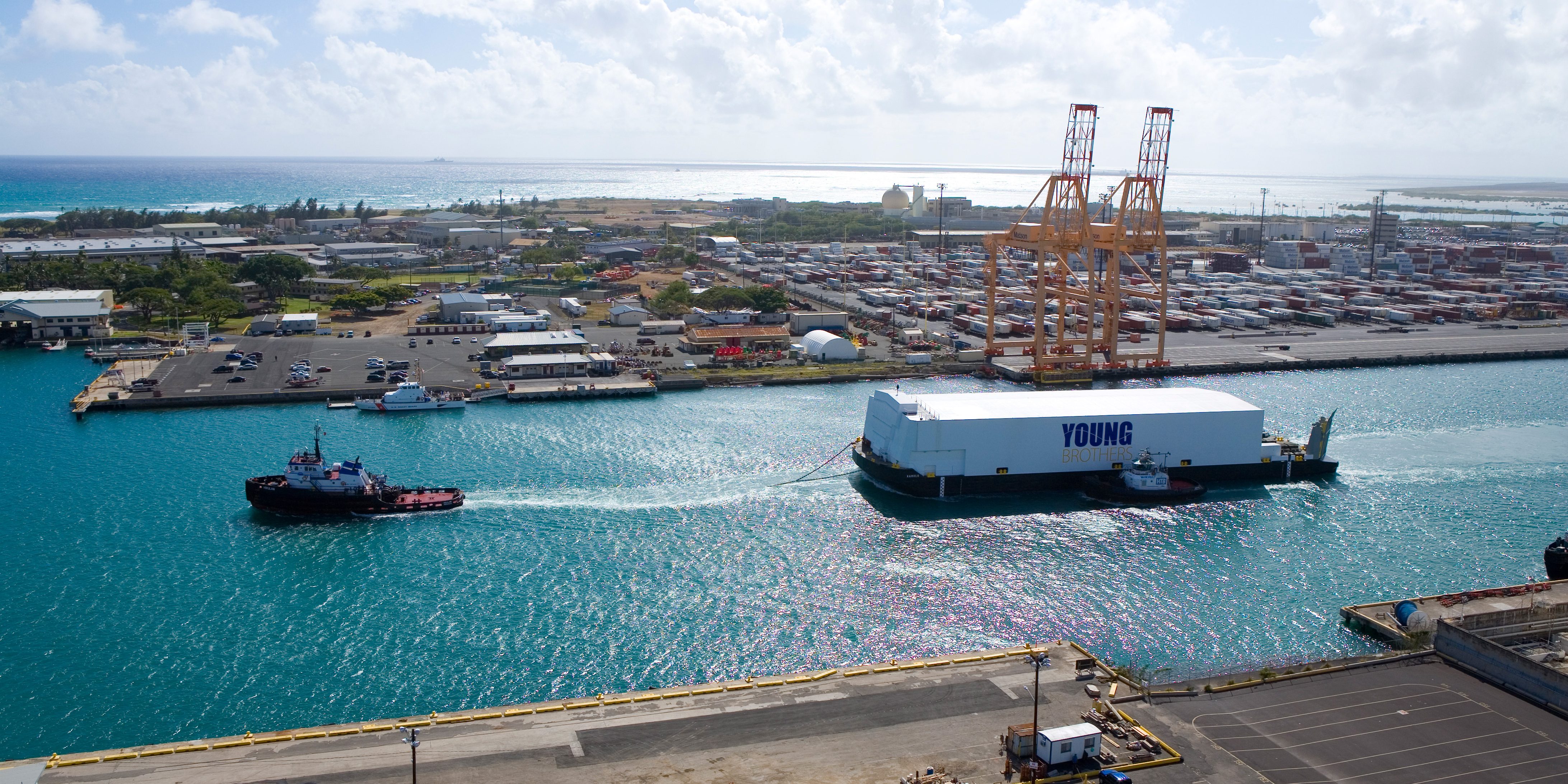 Clean hydrogen power that’s expected to lower emissions and reduce energy consumption will be coming to the Port of Honolulu in 2015 after the completion of a new fuel cell technology demonstration, one that could lead to a commercial technology for ports worldwide. A new fuel cell demonstration project led by Sandia will feature a portable, self-contained hydrogen fuel cell unit currently in the design phase. Once completed, it will be deployed to the Port of Honolulu by Young Brothers, Ltd., one of the project partners and a primary shipper of goods throughout the Hawaiian Islands. (Photo courtesy of Young Brothers, Ltd.)

The work comes on the heels of last year’s study and analysis that confirmed the viability of hydrogen fuel cells to provide auxiliary power to docked or anchored ships. Hydrogen researchers at Sandia National Laboratories have joined with several partners in the follow-up project, which will result in a portable, self-contained hydrogen fuel cell unit that can float on a barge, sit on a dock or be transported to wherever it’s needed to provide electrical power.

Ports have been a major source of water and air pollution in the U.S. but remained relatively unregulated until recent years. As ports have begun to expand and their impact on the environment has become more apparent, port operators face a variety of regulations. Many ports have begun to enact sustainability goals or adopt green practices, and that’s where fuel cells can play a role.

“No one has ever built this kind of custom unit for this purpose,” said Sandia’s project manager, Joe Pratt. The unit, he said, will fit inside a 20-foot shipping container and will consist of four 30-kilowatt fuel cells, a hydrogen storage system and power conversion equipment.

The system will be delivered to and deployed by Young Brothers, Ltd., one of the project partners and a primary shipper of goods throughout the Hawaiian Islands. The unit is undergoing detailed engineering and design through mid-2014 and, after fabrication, assembly and training for Young Brothers operators, will be operational during a six-month deployment in early 2015. Young Brothers, the project’s demonstration partner, is a subsidiary of Foss Maritime Company, a shipping firm that has strong environmental and financial interests in the project. “We compared the efficiencies of their diesel engines versus fuel cells, studied the energy efficiencies at various power levels and estimated the savings and reductions in emissions that would be realized if they were to convert to a fuel cell-powered operation,” said Pratt. Analyses have shown that when generators are frequently producing less than maximum power, such as in the Hawaii application, the efficiency advantage of fuel cells compared to the combustion engine increases, he said.

Though the study had to make some assumptions (the purchase price of hydrogen, for instance), it determined that Young Brothers could save fuel and energy while greatly reducing emissions, if it switched primarily to fuel cells.

With promising study results and a shipping partner, Young Brothers, to serve as an early adopter and operate the fuel cell system for six months, EERE and MARAD decided to fund the demonstration. The project’s other partners include Hydrogenics Corp., which will design and build the prototype unit and supply the fuel cells, and Hawaii Natural Energy Institute, which will provide assistance with hydrogen supply issues.

Other stakeholders include the U.S. Coast Guard and its local Sector Honolulu office and the American Bureau of Shipping. These organizations have regulatory authority over the design and operation of the prototype and see the project as a way to assist their development of formal regulations for hydrogen and fuel cells in the maritime environment. They, along with the Department of Energy’s Hydrogen Safety Review Panel, will review the safety aspects of the design and operating plans.

Future deployments and other ports
In addition to its project management role, Sandia is providing technical expertise in hydrogen and fuel cells, particularly in the areas of codes and standards, system design, safety systems, data collection and analysis of both operations and the business case for deployment.

Following the six-month deployment of the fuel cell system, Pratt said the project team will analyze the project’s successes and challenges, including the operating and cost parameters needed to make a business case at other ports.

The long-range goal, he said, is to develop a commercial-ready technology that can be widely used at other ports. The project team sees a strong market need and desire for a fuel cell solution, not only at maritime ports but also for other applications, such as providing power to users that are not connected to an electric grid.