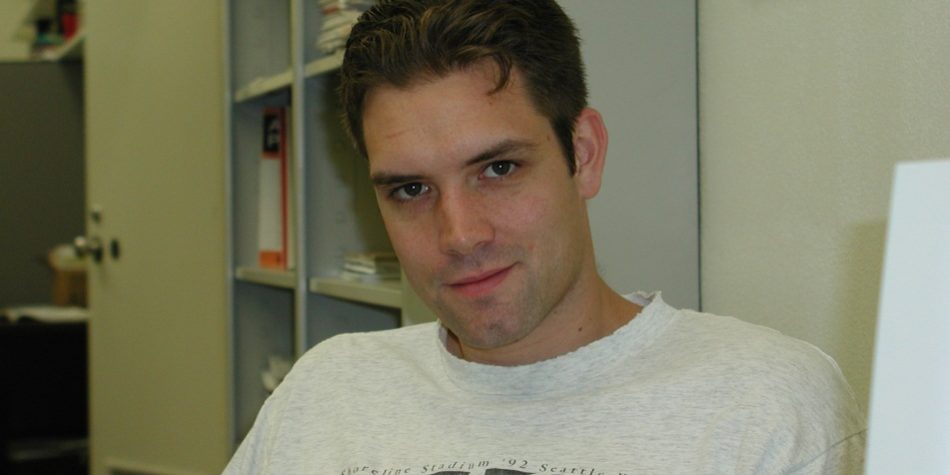 CRF researcher Kevin Strecker was a brilliant physicist with a child’s enthusiasm and curiosity for science, a giving mentor, and a person who cared deeply for others. On Nov. 4, he died of a heart attack at the age of 38. He is survived by his wife of 16 years, Michelle.

“He was a once-in-a-career colleague,” says Lorraine Sadler. “I first heard his name when I was a graduate student. He was a pioneer in the field of cold atom physics.”

Kevin earned his PhD from Rice University in 2004. He pioneered the Feshbach resonance in lithium to create novel states of matter including matter wave solutions of attractively interacting Bose-Einstein condensates and strongly interacting Fermi gases.

That same year he joined the Combustion Chemistry and Diagnostics Department as a postdoctoral associate working with Dave Chandler on Chemical Dynamics research. In 2007 he was hired as a staff member and continued to contribute to Chemical Dynamics research at the CRF and lead new technique development for non-proliferation and chemical detection with his colleagues.

“He was one of the best and brightest, just a sponge for knowledge,” says Dave. “We bonded as colleagues immediately. Even though he was my postdoc, he mentored me as much as I mentored him. At his core, Kevin wanted to understand the world and make a difference. He was an extremely kind person. People gravitated towards him because of his talents and approachability. It was all about moving forward, he helped everyone he came in contact with to reach their potential.”

“Kevin worked on a range of projects in both fundamental chemistry research as well as in non-proliferation programs. He was able to have significant impact in both program areas in his relatively short time at Sandia,” says Tom Settersten , who was Kevin’s manager. “I will always be impressed by his passion for tackling the most difficult problems, his knack for finding clever solutions, and his ability to see the interesting science in all that he did, even very applied projects. Kevin will surely be missed by Sandia as well as the broader scientific community.”

“He was an amazing experimentalist and he loved being in the lab,” says Lorraine. “Kevin followed a certain drumbeat in his head that only he could hear, and it always seemed as if he was three steps ahead. He had a way of having your back. If something was not going right, someone was not treating you right, or if he saw an injustice, he would try to fix it.”

Outside of work, Lorraine describes Kevin as a bit of a Renaissance man. “He knew how to do almost anything, especially if it was hands-on. He was an avid cook and he and his wife Michelle rebuilt their entire house practically by themselves,” she says. “He loved his Mini Cooper. It was just quirky enough to fit his personality.”

“To me, he was a true physicist with deep insights. He had the extraordinary ability of exacting the essence of a problem from complex context quickly and accurately,” says colleague Haifeng Huang . “But he was much more than an excellent scientist; he was a real gentleman. Whenever I or someone else had a problem, he was there to help. I cannot believe a person with such a kind heart passed away from a heart attack.”

“I had the pleasure of working with Kevin on an atom-trapping project,” says Scott Bisson . “I was immediately struck by his abilities and knew that we had someone truly exceptional on our team. He was an exceptional experimentalist, and was able to improvise with just about anything. He was also very patient, and was always willing to take time to explain things. He always put the project and his team ahead of himself. Above all, he was my friend and I will miss him.”

Kristi Duenas got to know Kevin about five years ago through the Dynamics of Molecular Collision Conference. “I learned firsthand not only how insanely intelligent he was on a multitude of subjects, but also what an awesome human being he was,” she says. “I still find myself expecting him to saunter in and up the stairs with his faint head nod in good morning or up to my desk with the next task he needed help with because he seemed to think I could do anything. I truly appreciated the compliment and will sorely miss his presence here. The sun shines just a little less brightly with this loss.”