You are here: Home » Blog » Sandia LED Pulser delivers laser-like performance at a fraction of the cost

on August 25, 2015 By Tara In Blog Comments Off on Sandia LED Pulser delivers laser-like performance at a fraction of the cost 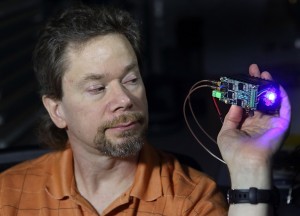 Chris Carlen demonstrates the Sandia LED Pulser which can be used in science, engineering, and research and development applications.

By Michael Padilla
When Chris Carlen developed an enthusiasm for flashlights containing high-power LEDs, he didn’t anticipate that his hobby interest would lead to the creation of a new, high-speed LED driver delivering lighting performance that exceeds that of conventional sources at a fraction of cost.

The Sandia LED Pulser provides high-brightness, rapidly pulsed, multi-color light for scientific, industrial, or commercial uses. In some cases, the LED Pulser can even displace lasers.

“I had the idea a few years ago to see if high-powered multi-colored LEDs in flashlights could be turned on and off rapidly by an electronic circuit to produce short light pulses similar to that of a 10-nanosecond pulsed laser, or even down to one nanosecond depending on the LED,” Chris says.

“It was more of a curiosity initially, but then something came up where a light source being used in a lab wasn’t working out, so I decided to try to make a quick prototype to pulse an LED, which worked out pretty good.”

Contributing to new scientific discoveries
The LED Pulser can be used in various science, engineering, and research and development applications that are otherwise possible only with far more expensive laser or arclamp light-sources and optics.

It has already been used in several research studies that have helped Sandia take the lead in developing the science base needed by engineers to design and optimize cleaner, more efficient engines, thereby impacting local air quality and public health as well as global climate change.

In one of these studies, a high-speed backlit spray microscopy application, the LED Pulser delivered 50-ns pulses at 200 kHz that “froze” the motion of liquid droplets and ligaments. This enabled high-resolution imaging of atomization in a high-pressure diesel fuel-spray. Spray atomization and mixing profoundly affects the combustion process in both spark-ignition and diesel engines, impacting both efficiency and emissions.

The LED Pulser was also used in a high-speed soot extinction imaging application. In this work, the LED Pulser generated high-intensity pulses matched to the camera exposure duration (2 microseconds) to enable quantitative evaluation of the evolution of diesel soot concentrations.
The strong pulse intensity relative to combustion-generated light allowed fullfield soot imaging at high frame rates, providing information needed to predict soot formation and oxidation processes.
A final example is the application of the Pulser for ignition detection via high-speed Schlieren imaging. The small LED source allows for excellent light beam collimation, while the wide bandwidth relative to lasers enables speckle-free imaging. Work in this area has led to the unambiguous identification of first- and second-stage diesel ignition locations, leading to a better understanding of how pilot fuel injection strategies impact combustion and emissions formation.

Increasing intensity with short pulses maintains the level of light energy delivered, which is essential for many applications. The LED Pulser can be an extremely economical replacement for lasers in some applications. Further, a single device can emit up to four different colors, each with independent pulse timing, from a nearly coincident source area. This capability should expand the range of optical applications as well as enable new imaging techniques. Moreover, the low cost of this device will allow much broader use of diagnostic techniques throughout the scientific and engineering communities, leading to faster progress in developing an understanding and ability to predict important physical processes.

“There are still some things that can be done to try to make it better,” he says. “When dealing with extremely high currents in very short times, rather exotic techniques need to be used.”

Since the LED Pulser is designed to deliver as much power as possible, the circuits currently drive the LEDs to the brink of destruction. Failure rates with this design, while acceptable in a research environment, are not appropriate for the commercial market. Commercializing the device for applications outside of scientific research would require either reducing the delivered power to a level that yields an acceptable failure rate or improving the design to achieve a low failure rate even at the high delivered powers.

Chris is working on an LED Pulser that is 10 cubic inches in size and can produce 240 amps of drive current, for about 150W of peak optical power, depending on the LED used. “What’s interesting about the Pulser is the power density, i.e., how much power it can deliver compared to its size,” he says.

There are several areas he is focusing on to improve the LED Pulser. One area is to build a faster driver circuit and improve the connection between the driving board and the LEDs — driving toward pulse durations of less than 10 nanoseconds. Another area of consideration, key to potential commercialization, is to devise a protection circuit to greatly reduce the chances of destroying the LEDs. “I didn’t anticipate the LED Pulser would become as popular as it has,” he says. “I’m just happy if it is helping to solve people’s problems.”