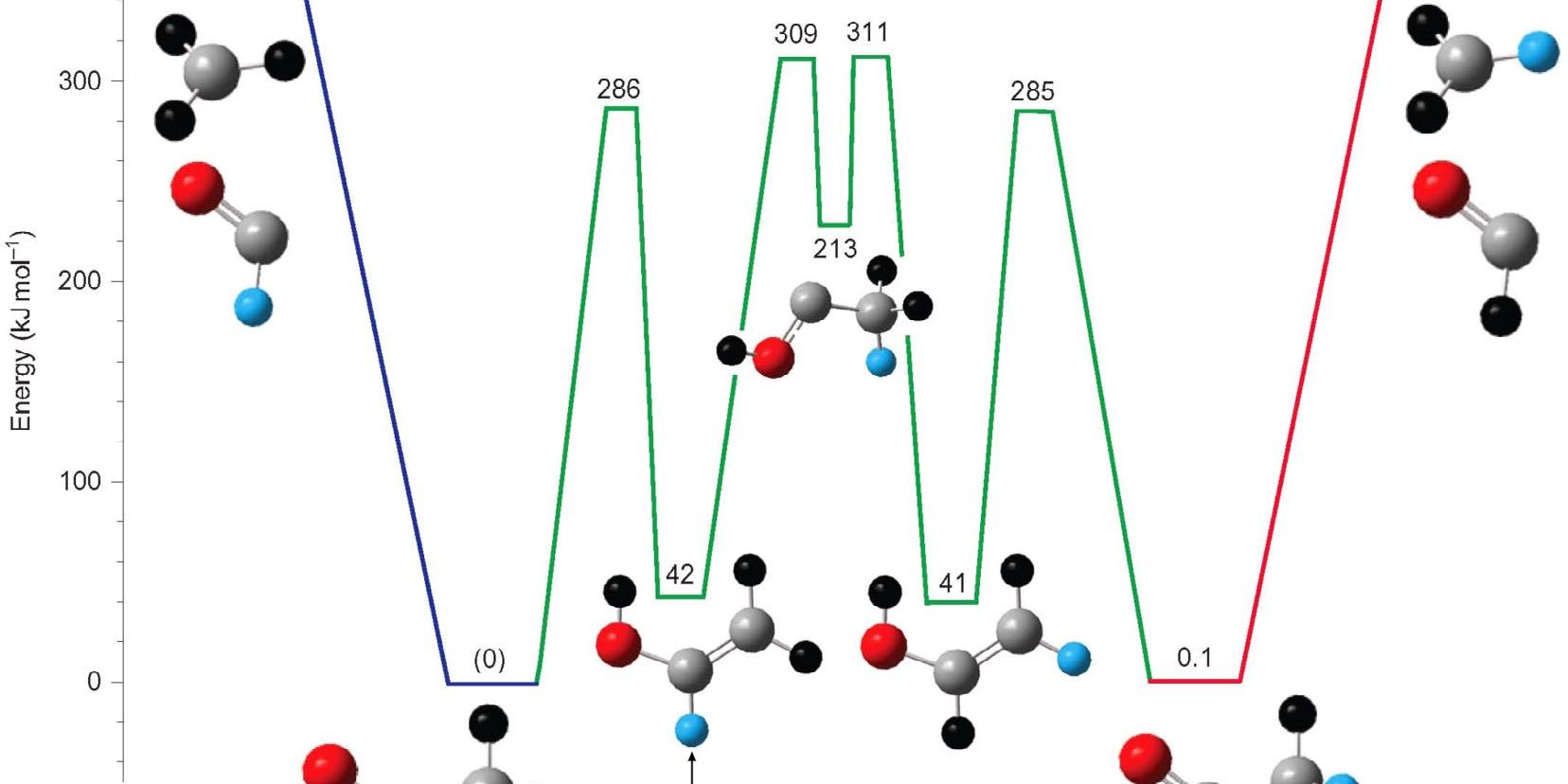 Isotopic labeling of chemical compounds is one of the most powerful techniques for understanding how chemical reactions proceed. Adding an extra neutron to an atom’s nucleus [changing hydrogen (H) into deuterium (D) for example] doesn’t usually change chemistry, but the extra mass of the heavier isotope allows scientists to track the position of this atomic label, often illuminating pathways of chemical reactions that might otherwise remain hidden. This technique is employed across a tremendous range of research, from astronomers studying the origins of the universe, to earth scientists studying historical temperature profiles, to biologists tracking lipid synthesis in bacteria. But new research shows such isotope labeling experiments can exhibit
some unexpected twists.

An international team—directed by Meredith J. T. Jordan and Scott H. Kable (University of Sydney), and including David Osborn from the CRF’s Combustion Chemistry Department and researchers from Argonne National Laboratory—recently published the results of a study investigating H/D scrambling in acetaldehyde near the energetic threshold for breaking the Scrambling molecules with light formyl C–H bond (Heazlewood et al., “Near-threshold H/D exchange in CD3CHO photodissociation,” Nature Chemistry, 23 May 2011, http://www.nature.com/nchem/journal/v3/n6/full/nchem.1052.html).

In this study, the research team first replaced three of the hydrogen atoms in acetaldehyde molecules with their heavier isotope, deuterium. They then applied laser light with energies slightly higher than that needed to break the chemical bonds (called the threshold energy), and made the surprising discovery that the deuterium atoms were scrambled throughout the molecule despite the relatively meager amount of energy supplied. Comparisons with chemical models have
provided an explanation of how this scrambling happens.

“The photo-excitation wavelengths employed in this study are characteristic of those from the solar spectrum that reach the troposphere—raising the specter that the present findings may have implications for atmospheric chemistry models.”

Why study reaction pathways near their threshold?

As the energy available to a chemical reaction is reduced, the number of reaction pathways open to the energetic molecule also reduces. In principle, interpreting the reaction outcome should also become simpler. However, as the chaff of multiple high-energy pathways is removed, careful investigation can reveal details about chemical mechanisms and pathways that either were not suspected or were hidden previously. An analogy can be made to a waterfall: when the water flow is high, underlying structures of the cliff face behind the fall can be very difficult to discern. However, as the flow of water slows to a trickle, a detailed study of the cliff can be undertaken. Likewise with chemical reactions— at energies near threshold, the forces that control the breaking of chemical bonds and the formation of new bonds can be studied in much more detail than is possible at higher energies. Figure 1. Schematic of the critical points on the global potential energy surface for C2D3HO. The reactant, CD3CHO, can react to the left to form primary products (blue) or isomerize to the right through a maze of intermediate structures (green), which can continue to the final products (red) with exchange of H/D. The dominant pathway involves at least four isomerizations via H or D transfer. Key to atom colors: C, grey; O, red; H, blue; D, black. (Adapted from Heazlewood et al.)

Once the torrent of acetaldehyde reaction pathways was reduced to a metaphorical trickle and studied, several fascinating phenomena were observed. The team studied acetaldehyde-d3 (CD3CHO) molecules in which all the hydrogens of the methyl group were substituted with deuterium atoms. The expected photochemical products of this reaction were the simple cleavage of the carbon–carbon bond, which forms CD3 + HCO. However, the experiments showed that up to 17% of the radical products underwent H/D-exchange to yield CD2H + DCO.

One can envision simple pathways to exchange a D atom from the left side of the molecule with an H atom from the right side. However, calculations showed that none of these simple routes were energetically feasible. Further calculations suggested that a more complicated (but lower-energy) pathway, depicted in Figure 1, could explain the results. The degree of scrambling, quantified by the percentage of the unexpected DCO product produced, was the key observation
from the experiments that this calculation reproduced. The calculations further showed that the H/D exchange involved at least four and, on average, up to 20 isomerizations, statistically breaking every CH/CD bond in the molecule en route. The “simple” dissociation of CH3CHO into CH3 + HCO is in fact not simple at all, but was simply obscured because all the hydrogen atoms are indistinguishable in the normal (unlabeled) version of acetaldehyde.

Scrambled by the sun?

The fact that complete isotopic scrambling could occur at such low energies could complicate the interpretation of isotope-labeling experiments. In addition, this research implies that new pathways for the degradation of acetaldehyde in the earth’s atmosphere, where it is a key species in long-range transport of pollution, should be considered. The first intermediate formed in the scrambling reaction, vinyl alcohol, is an isomer of acetaldehyde (as shown in Figure 1). Based on the scrambling experiments, the team predicted that acetaldehyde, absorbing ultraviolet radiation from the sun, will convert to vinyl alcohol. Vinyl
alcohol, on the other hand, does not absorb sunlight, which eliminates the possibility that sunlight will convert it back to acetaldehyde. What is the fate of vinyl alcohol in the atmosphere? The answer is not known. Atmospheric models do not currently include this class of compounds, known as enols, just as ombustion models did not contain enols until CRF researchers discovered them in flames several years ago.