on December 19, 2014 By eciscomm In Blog, Combustion Chemistry, Engine Combustion, Partnerships Comments Off on Turbulent Mixed-Mode Combustion Studied in a New Piloted Burner

Flame stability is an important trait of practical combustors that impacts combustion emissions and the ability of the combustor to operate effectively with changing fuel and oxidizer compositions and flow rates. Fuel and oxidizer in combustion systems are rarely perfectly premixed or perfectly segregated as they enter the flame zone. Thus, a combination of combustion modes:

may be present in practical combustors. Combustion models must accurately predict the behavior of such mixed-mode combustors. However, few experiments have been performed on mixed-mode turbulent combustion in burners with well-defined boundary conditions critical for quantitatively testing models and better understanding the fundamental behavior of such flames.

To address these needs, Sydney University has developed a variant of the well-known Sydney/Sandia piloted jet burner. This new burner (Figure 1) introduces a retractable central tube (d = 4 mm) within the main tube (D = 7.5 mm) of the piloted burner. Experiments at Sydney [1] showed that flame stability, as measured by the blowoff velocity, could be enhanced by as much as 40% compared to the homogeneous jet flame when the central tube was retracted by an optimal distance and with fuel delivered through the central tube and air through the main tube’s annulus. 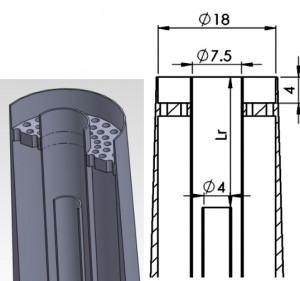 Figure 1. Isometric solid model of the piloted burner and cutaway schematic with dimensions in mm.

Collaborating with visiting Professor Assaad Masri and student Shaun Meares from Sydney University, Sandians Gaetano Magnotti, Robert Barlow, and Bob Harmon have conducted line-imaged Raman/Rayleigh/CO-laser-induced fluorescence measurements of temperature and all major species in several of these piloted flames to better understand the flame stabilization and mixed-mode combustion phenomena [2]. Figure 2 shows the blowoff behavior versus recess distance, Lr, for flames with one part CH4 (volumetric) delivered through the central tube and two parts air delivered through the annulus, while using a premixed pilot flame burning C2H2, H2, air, CO2, and N2 in proportions to match the adiabatic equilibrium composition and temperature of stoichiometric CH4/air. (This mixture achieves the flame speed necessary for a robust pilot without adding complexity to the modeling problem.) The methane flame is most stable when the central tube is recessed by 75 mm, ten times the jet exit diameter, and the blowoff velocity asymptotes to the homogeneously mixed value as Lr approaches 300 mm.

The filled circle and square symbols in the left frame of Figure 2 mark conditions for two (each at 70% of blowoff) of five flames studied. The corresponding mean radial profiles (center frame) and scatter plots (right frames) of mixture fraction and temperature, measured at one jet diameter above the burner exit, show that fluid at the edge of the jet, adjacent to the hot pilot gases, is near-stoichiometric in the optimally stable (Lr = 75 mm) flame. Detailed analysis of the scalar measurements has shown that stratified premixed combustion dominates the very near field of this flame. The resulting increase in the rate of heat release augments the pilot’s effect and significantly enhances flame stability. Downstream of the flame base, a rapid transition to a diffusion-type flame structure occurs.

Some features of this transition in combustion mode are tracked in Figure 3, which compares the mass fractions of CH4 and CO2 in the Lr = 300 mm and Lr = 75 mm flames. Mass fractions are conditioned on temperature and the change in mixture fraction, ξ, across the fuel-rich portion of each instantaneous, line-imaged flame realization. Here, the conditioning parameter Δξ/ΔT is evaluated across a 1000 K temperature difference centered at 1200 K, roughly midway between room temperature and the maximum flame temperature. 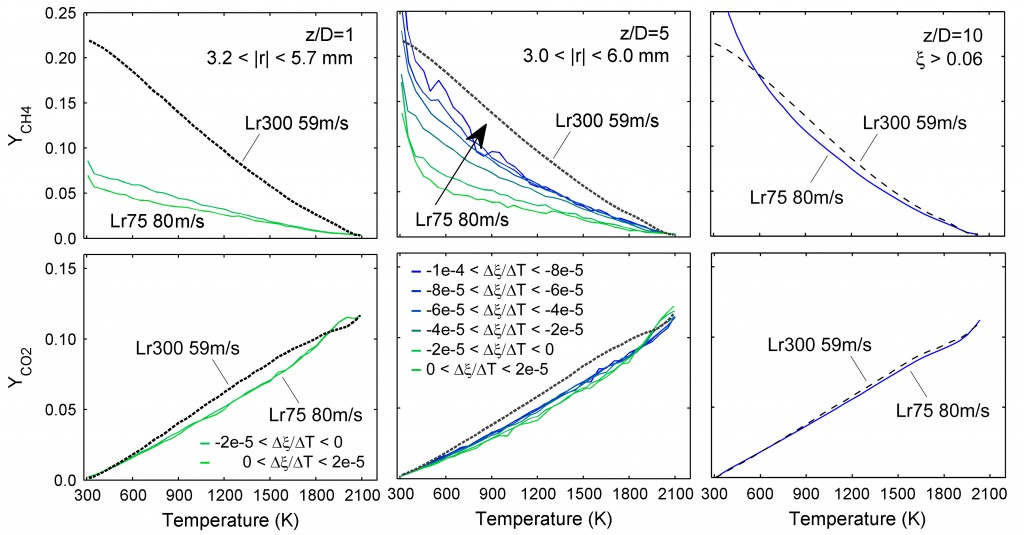 Figure 3. CH4 and CO2 mass fractions conditioned on temperature and Δξ/ξT, the instantaneous change in mixture fraction across the rich part of each flame.

The mass fraction curves for the near-homogeneous jet flame (Lr = 300 mm) are nearly identical at all three downstream locations, z/D = 1, 5, 10, and they follow strained diffusion flame behavior, with Δξ/ΔT ≈–9 × 10–5 K–1. In contrast, the inhomogeneous, optimally stable jet flame (Lr = 75 mm) starts with a stratified premixed flame structure at z/D = 1, indicated by Δξ/ΔT values near zero and an upward bend in the CO2 curves through the intermediate temperature range. The CH4 and CO2 mass fraction curves for the Lr = 75 mm case evolve to a diffusion flame structure by z/D = 10, and there is a range of intermediate structures at z/D = 5.

Complete experimental results will be made available for comparison with simulations within the framework of the Turbulent Nonpremixed Flames Workshop series, and we anticipate that those comparisons will yield a better quantitative understanding of the ability of various models to accurately predict turbulent mixed-mode combustion.