Concentrating on Sunshine to Advance the Hydrogen Economy 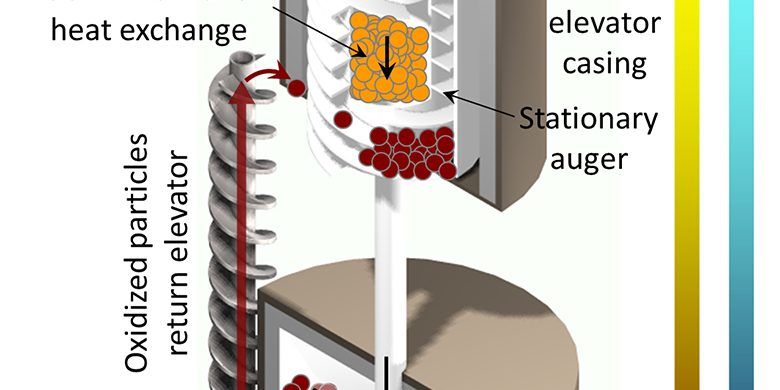 Can solar energy be harnessed to address climate change and other impacts of the world’s dependence on carbon-based fuels? A Sandia team that includes principal investigator Tony McDaniel in the Hydrogen and Combustion Research Department and Ivan Ermanoski in the Materials, Devices, and Energy Technologies Department, has taken significant steps toward an intriguing possibility: creating hydrogen fuel using a two-step thermochemical process powered by the sun.

“If this concept can be validated and scaled up, it could lead to an economically viable means of creating hydrogen from water and sunlight—two very abundant resources,” says Tony. Hydrogen fuel may be an environmentally friendly alternative to gasoline, natural gas, and other carbon-based fossil fuels—especially if the hydrogen can be generated without using fossil fuels in the process.

This work builds on other efforts, notably Sandia’s Sunshine to Petrol (S2P) Grand Challenge Laboratory-Directed Research and Development (LDRD) project. Collaborators from the University of Colorado, Colorado School of Mines, and Bucknell University are also contributing to this project, which is funded by the Department of Energy’s Fuel Cell Technology Office under the Solar ThermoChemical Hydrogen Production (STCH) program.

The broad outline of the team’s concept is fairly simple: use sunlight to split water into hydrogen and oxygen. The concept uses a second-generation version of the Sandia-developed CR5 receiver reactor for converting solar energy into a chemical fuel, such as hydrogen. The reactor is placed at the top of a tower centered within a large field of heliostats (flat mirrors that track the sun). Such concentrating solar power plants already exist in many parts of the world, including Spain and the United States. In the Sandia reactor, minuscule metal-oxide particles (a few tens of microns in diameter) acting as the working “fluid” are transported between two isolated reaction zones: an upper chamber heated by concentrated solar energy and a lower chamber exposed to steam. Particles are lifted from the lower to the upper chamber using an elevator concept patented by the team (based on an Olds Elevator™). They are returned to the lower chamber by gravity.

In the upper chamber, sunlight heats the particles to temperatures up to 1600 °C, providing sufficient energy to remove oxygen from the oxide particle. The oxygen is pumped away, and the oxygen-deficient particles flow to the lower chamber. Here, oxygen in the steam breaks away from the water molecule to deposit back into the reduced particle, creating hydrogen in the process. The re-oxidized particles are then elevated to the upper chamber to repeat the cycle—up to thousands of times before particle replacement, according to expectations.

While drawing on past work to generate hydrogen by splitting water, this project is exploring several novel attributes that hold particular promise. For example, the development of a process that requires only two steps, as opposed to the multiple steps required for many other thermochemical processes under development, will allow for greater efficiencies. Key features of the Sandia CR5 reactor—including many from the original design, such as recuperation of thermal energy, continuous on-sun operation, and direct absorption of sunlight by the metal-oxide—will further enhance efficiency. The most significant of these features is the intrinsic gas and pressure separation between the two chambers made possible by the moving packed bed of particles.

Equally important, the team has identified a novel material chemistry for the metal oxide particles. Researchers to date have focused on two chemistries, ferrite and ceria, the current state of the art. Both ferrite and ceria have issues and, at best, have demonstrated efficiencies of less than a few percent. “We have identified a different chemistry based on perovskite materials that opens the door to some interesting possibilities,” Tony says. A Sandia project to develop new thermochemical materials led by Andrea Ambrosini, also of the Materials, Devices, and Energy Technologies Department, has been instrumental in this effort.

As reported in a recent paper (“Sr- and Mn-doped LaAlO3−δ for solar thermochemical H2 and CO production,” Energy and Environmental Science), the perovskite chemistry produces significantly more hydrogen per reduction/oxidation cycle than ceria while maintaining rapid reaction kinetics, a principal advantage of ceria. In addition, the perovskites can be cycled effectively at temperatures below 1350 °C, as opposed to the 1500 °C minimum temperature required for ceria. Operating at a lower temperature range allows for use of less exotic, and therefore less expensive, materials for constructing the reactor.

In fact, the team believes perovskites can meet or exceed the 26% solar conversion efficiency targeted by the DOE STCH program—a goal thought to be beyond the capabilities of ferrite or ceria. In addition, because an overwhelmingly large number of compounds can be formed in the perovskite crystal structure, it is highly likely that a metal-oxide material will efficiently and economically produce hydrogen fuel.

To evaluate and refine their reactor design concept, the project team is building a small (1 kW) engineering test stand and evaluating the particle conveyance and pressure separation concepts at room temperature. Soon, the team will retrofit the stand to test these features simultaneously and at high temperature, working toward a deeper understanding of the reactor and how to create a viable system at operating scale.

Though aware of the work ahead, the team is optimistic about the prospects for their reactor design. “Ultimately, this effort could contribute to a new transportation infrastructure based on hydrogen or enable carbon-neutral, renewable-based synthetic liquid fuels that could be inserted directly into the existing infrastructure. Either way, it could smooth the transition away from fossil fuels,” Tony states.